What Happens When You’re Knocked Unconscious? 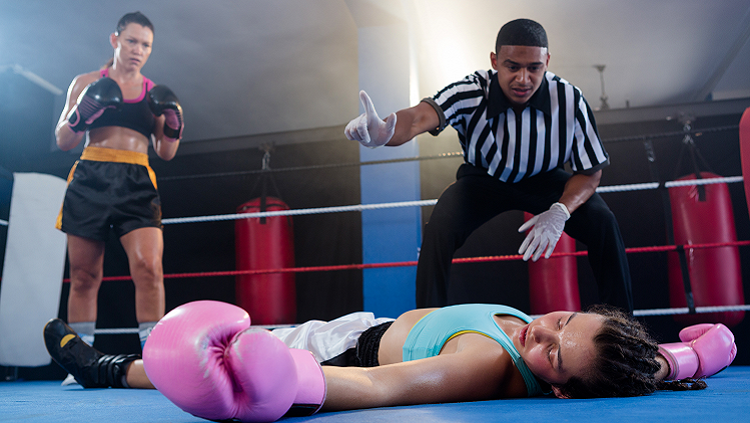 You’ve seen it on television — a character on a show or a professional athlete on the field receives a sharp blow to the head, and crumples on the ground, completely unconscious. A knockout blow is a traumatic brain injury or concussion, but not every concussion means a loss of consciousness. Christopher Giza, professor of pediatric neurology and neurosurgery at UCLA, explains what happens when you’re knocked out, how it’s different from the average concussion, and the best course of action following a knock-out blow.

What does it mean to be knocked unconscious?

Your brain has three big parts. There’s the left hemisphere, the right hemisphere, and the brainstem at the bottom. You can lose consciousness if both hemispheres are turned off at once — though if only one is affected, the other can pick up some of the slack. You can also lose consciousness if part of the brainstem is knocked offline. Brain activity can be affected by a number of things — oxygen can be cut off to certain parts, or a blood vessel might burst. But a blow to the head can also cause a disruption that could lead to a loss of consciousness.

What is the difference between being knocked out and suffering a concussion?

They’re related, but not the same. People used to think that if you didn’t lose consciousness, you didn’t have to worry about being concussed. Thanks to further research into concussions, we now know that, in about 90 percent of diagnosed concussions, there is no loss of consciousness.

During any severe blow to the head, the same thing is happening. The brain twists, the circuits can break, and the damage sends the brain into crisis. But different parts of the brain can be affected. Concussions typically cause vision problems, disorientation, memory loss, headaches, balance issues, and a host of other ailments as the circuits that undergird these functions go down. But as long as the part of the brain responsible for consciousness is minimally affected, there’s no guarantee that you’ll be knocked out.

What are the long term effects of being knocked unconscious?

It depends on the severity of the injury. If you lose consciousness briefly, and suffer a concussion, 75 to 90 percent of people will fully recover in a few months. But severe damage to the brain can cause unconsciousness for days, weeks, or even longer. If there is internal bleeding or swelling in the brain, surgery may be necessary to relieve pressure on the brain. Severe injuries can also cause lasting effects that vary — including memory loss, paralysis, seizures, and lasting behavioral or cognitive changes — depending on the areas of the brain affected. But in those cases, unconsciousness is a symptom of the injury, not a cause of long term deficits.

If you lose consciousness from a blow to the head, what is the best course of action?

If the loss of consciousness is very brief — less than a minute — and the other symptoms of a concussion disappear quickly, a visit to a primary care doctor would be sufficient to make sure there is no danger. If someone is knocked unconscious for more than a minute and symptoms don’t fade within a few minutes, it is important to bring them to an emergency room to get checked for a more severe traumatic brain injury. Doctors will check to make sure there is no internal bleeding or bruising that can be dangerous.

Sports have shaped our view on this topic — whether it’s a knockout blow in the ring or a football player who doesn’t get up from a bad tackle. What do sports media and the public get wrong about being knocked unconscious or other head injuries?

I think people get a few things wrong about concussions and unconsciousness, and they’re opposing perspectives on the issue. There’s one view that concussions are minor things, and that an athlete on the field who suffers any head injury should toughen up and persevere. But that is not correct — these are serious injuries that need to be addressed by a doctor or trained professional in order to prevent lasting damage. There’s another perspective, from a concerned parent or guardian, who watches their child playing a contact sport and are terrified of any blow to the head, and will try to prevent any risk of injury. For athletes, young and old, the risks of a head injury can be mitigated by a lot of factors, including knowledgeable coaches, enforcement of rules meant to limit the risk to players, and even just making sure equipment is in good shape and fits properly. Those precautions can prevent a lot of harm, and risks should be balanced with the benefits of any sport or physical activity.

This question was answered by Christopher Giza as told to Michael Richardson for BrainFacts.org.