Once the neural induction has occurred, the next step for new neurons is a journey to the proper position in the brain. This process is called migration, and it begins three to four weeks after a human baby is conceived. 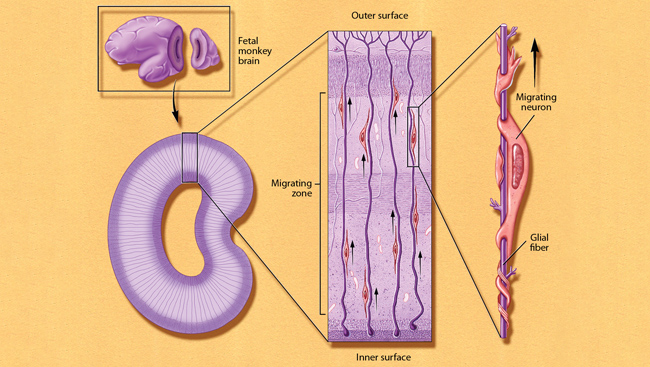 This is a cross-sectional view of the occipital lobe, which processes vision, of a three-month-old monkey fetus brain. The center shows immature neurons migrating along glial fibers. These neurons make transient connections with other neurons before reaching their destination. A single migrating neuron, shown about 2,500 times its actual size (right), uses a glial fiber as a guiding scaffold.
Illustration by Lydia V. Kibiuk, Baltimore, MD

At this time, the ectoderm starts to thicken and build up along the middle. As the cells continue to divide, a flat neural plate grows, followed by the formation of parallel ridges, similar to the creases in a paper airplane, that rise across its surface. Within a few days, the ridges fold in toward each other and fuse to form a hollow neural tube. The top of the tube thickens into three bulges that form the hindbrain, the midbrain, and the forebrain. Later in the process, at week seven, the first signs of the eyes and the brain’s hemispheres appear. As neurons are produced, they move from the neural tube’s ventricular zone, or inner surface, to near the border of the marginal zone, or outer surface.

After neurons stop dividing, they form an intermediate zone, where they gradually accumulate as the brain develops. The neurons then migrate to their final destination— with the help of a variety of guidance mechanisms. The most common guidance mechanism, accounting for about 90 percent of migration in humans, are glia, which project radially from the intermediate zone to the cortex. In this way, glia provide a temporary scaffolding for ushering neurons to their destination. This process of radial migration occurs in an “inside-out” manner; that is, the cells that arrive the earliest (the oldest ones) form the deepest layer of the cortex, whereas the late-arriving (the youngest) neurons form the outermost layer. Through another mechanism, inhibitory interneurons, small neurons with short pathways usually found in the central nervous system, migrate tangentially across the brain.

Migration is a delicate process and can be affected by different factors. External forces, such as alcohol, cocaine, or radiation, can prevent proper migration, resulting in misplacement of cells, which may lead to mental retardation or epilepsy. Furthermore, mutations in genes that regulate migration have been shown to cause some rare genetic forms of retardation and epilepsy in humans.