Myelination and Paring Back 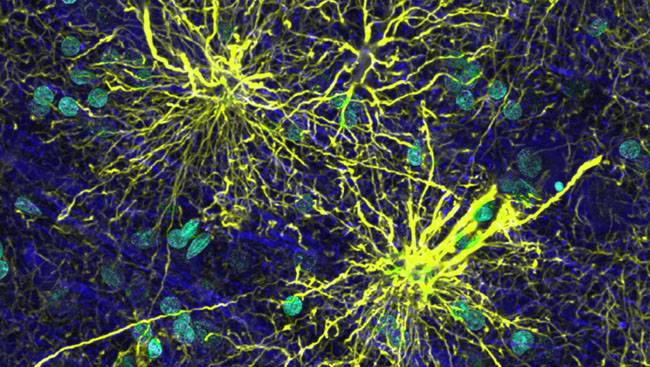 Insulation covering wires preserves the strength of the electrical signals that travel through them. The myelin sheath covering axons serves a similar purpose.

Myelination, the wrapping of axons by extensions of glia, increases the speed at which signals may be sent from one neuron to another by a factor of up to 100x. This advantage is due to how the sheath is wrapped. In between the myelin are gaps, called nodes of Ranvier, that are not covered in myelin. The electrical signal moves faster over the insulated portion, jumping from one node to another. This phenomenon, known as saltatory conduction (the word “saltatory” means “to jump”), is responsible for the rapid transmission of electrical signals. The process of myelination occurs throughout the lifespan.

After growth, the neural network is pared back to create a more efficient system. Only about half the neurons generated during development survive to function in the adult. Entire populations of neurons are removed through apoptosis, programmed cell death initiated in the cells. Apoptosis is activated if a neuron loses its battle with other neurons to receive life-sustaining chemical signals called trophic factors. These factors are produced in limited quantities by target tissues. Each type of trophic factor supports the survival of a distinct group of neurons. For example, nerve growth factor is important for sensory neuron survival. Recently, it has become clear that apoptosis is maintained into adulthood and constantly held in check. On the basis of this idea, researchers have found that injuries and some neurodegenerative diseases kill neurons not by directly inflicting damage but rather by activating the cells’ own death programs. This discovery — and its implication that death need not follow insult — have led to new avenues for therapy.

Brain cells also form excess connections at first. For example, in primates, the projections from the two eyes to the brain initially overlap and then sort out to separate territories devoted to one eye or the other. Furthermore, in the young primate cerebral cortex, the connections between neurons are greater in number and twice as dense as those in an adult primate. Communication between neurons with chemical and electrical signals is necessary to weed out the connections. The connections that are active and generating electrical currents survive, whereas those with little or no activity are lost. Thus, the circuits of the adult brain are formed, at least in part, by sculpting away incorrect connections to leave only the correct ones.