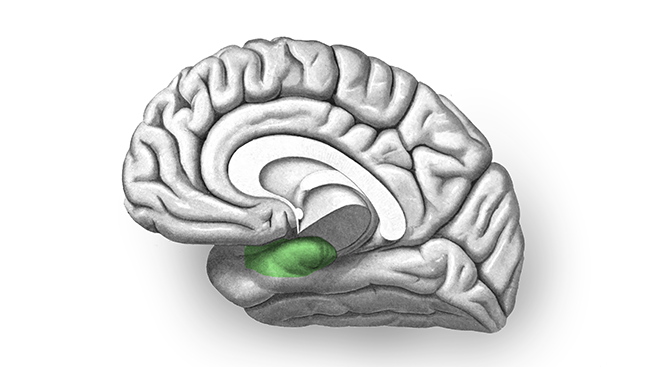 The entorhinal cortex, highlighted in green, houses grid cells. It is also often one of the first areas of the brain damaged by Alzheimer’s disease. For these patients, such damage can manifest as getting lost in familiar places.
Courtesy, with permission: Frank Galliard 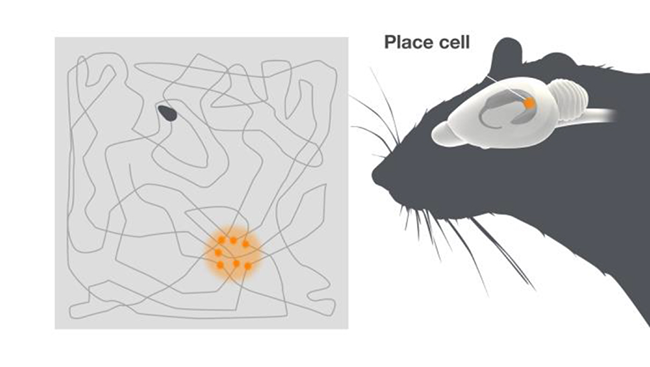 Place cells in the brain fire in particular locations. In the visualization above, a place cell fires every time the mouse’s path crosses the highlighted area.
Courtesy, with permission: Nobel Foundation 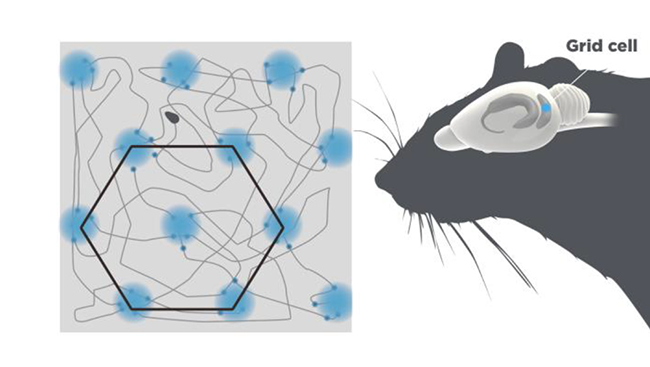 Grid cells fire at regular intervals as you move around a space. The image above plots those intervals for a single grid cell, forming a hexagonal grid. This hexagonal grid firing pattern emerges no matter the size or shape of the area the mouse is occupying.
Courtesy, with permission: Nobel Foundation. 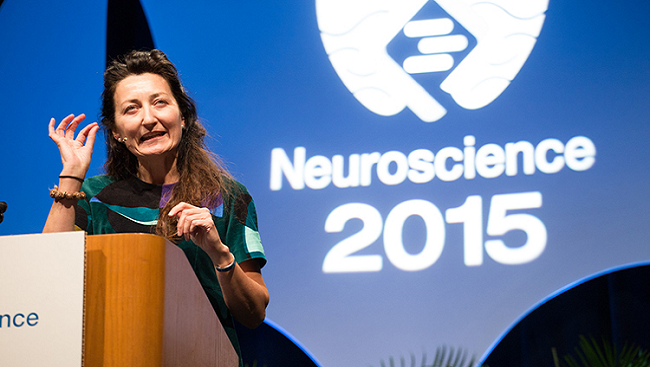 May-Britt Moser at Neuroscience 2015 during her Presidential Special Lecture.
Society for Neuroscience

The discovery of mapmaking cells in the brain opened a window into the human brain’s unparalleled computing power.

A Sense of Place

Henry Molaison was stuck in time. Asked the date, he answered 1953. Asked his age, he replied 27 years old. But, the year was 1955, and Henry was 29. And, every day as his doctors introduced themselves, it was as if they were meeting for the first time.

Molaison suffered debilitating epileptic seizures, and in 1953 surgeons excised small sections of his brain in the hopes of providing him some relief. The procedure worked — he suffered fewer seizures.

But, it also left him unable to form new memories. Molaison wasn’t alone — similar procedures prevented other people from forming new memories. In 1955 neuropsychologist Brenda Milner discovered why. Molaison and the others had suffered damage to the place in the brain where memories were made: a seahorse-shaped structure in each hemisphere called the hippocampus.

The discovery launched many investigations of the hippocampus. In 1970, John O’Keefe, an American neuroscientist at University College London, explored how individual neurons in the hippocampus could create memories. Using tiny electrodes, he recorded the electrical activity of the hippocampal neurons in rats while the animals went about their daily routines: exploring their enclosures, eating, drinking, and grooming. O’Keefe noticed a handful of neurons that fired sporadically, but he couldn’t discern why; they weren’t linked to any specific behavior. One day, he realized the cells weren’t firing in response to what the rat was doing, but to where it was doing it. They fired every time the rat was in a particular place in its enclosure.

In 1976, after more research, O’Keefe speculated the newly discovered “place cells” might be part of a spatial map in the brain. An internal map of the external world would allow rats — and presumably humans — to navigate their environments more creatively — if a rat finds the well-worn route to the water bowl suddenly blocked, it could use its mental map to devise a detour. The discovery revealed a role for the hippocampus in navigation as well as memory, opening a line of scientific inquiry into how our brains represent and make sense of the outside world.

Deep within the brain lies a map of the outside world comprised of bursts of electrical activity in hippocampal neurons called place cells.

When O’Keefe first characterized place cells in rats, he posited they were part of a larger mapping system in the brain. This mapping system might also keep tabs on a rat’s location by tracking the speed, direction, and distance traveled — similar to the way an airplane navigation system works. By 1983, O’Keefe’s lab demonstrated that place cells also encoded speed: when a rat ran faster, place cells fired more rapidly. In 1984, Jim Ranck at SUNY Downstate Medical Center identified neurons in a neighboring area of the brain that fired only when a rat was facing a certain direction. How the brain measured distance remained a mystery until 2005.

Two of O’Keefe’s former trainees, May-Britt Moser and Edvard Moser of the Norwegian University of Science and Technology in Trondheim, Norway, wondered if place cells in the hippocampus received spatial signals from elsewhere in the brain. Adjacent to the hippocampus lies an area that routes nearly all the information from higher brain areas: the entorhinal cortex. In 2005, the Mosers recorded neurons in the entorhinal cortex and observed they behaved like place cells, firing when rats were in particular places of the enclosure. But unlike place cells, each neuron fired in multiple locations. It took moving rats into larger enclosures to see the pattern: plotting all the locations where a single neuron fired revealed a triangular grid, a bit like the spaces on a Chinese checkerboard.

The “grid cells” of the entorhinal cortex fired in this pattern regardless of the shape or size of the enclosure; they fired even when the rats ran around in the dark. If place cells are the brain’s map, grid cells are its coordinate system.

For their discovery of the brain’s positioning system, John O’Keefe, May-Britt Moser, and Edvard Moser were awarded the 2014 Nobel Prize in Physiology or Medicine.

The combination of place cells and grid cells form the brain’s version of a global positioning system, or GPS, to help us find our way. Understanding the system offers insight into how the brain computes and how Alzheimer’s disease takes its toll on the brain.

Our ability to reason, plan, and imagine sets us apart from other animals. All of this higher level thinking takes place in our cerebral cortices — the wrinkled, outer layer of the brain that’s bigger in humans than other animals. The problem for scientists trying to understand how the cerebral cortex generates thought is that they can’t reliably detect how interactions between individual neurons drive the process. Grid cell activity represents an internal code — cells fire in a predictable way without input from the environment. As such, they may provide a window into how humans developed higher level thinking.

For many Alzheimer’s patients, getting lost in familiar places is one of the earliest symptoms of the disease. It turns out the entorhinal cortex — the area of the brain housing grid cells — often shows the first signs of damage in Alzheimer’s. Starting in the entorhinal cortex, the disease spreads through the brain, clogging and damaging neurons with tangled proteins, ultimately killing them. Researchers at Columbia University found mutant mice with high levels of the Alzheimer’s protein tangles in their brains displayed disrupted grid cell firing and had trouble navigating a maze.

Because grid cells in the living human brain are inaccessible, researchers in Germany and the Netherlands studied grid cell activity in people using functional magnetic resonance imaging (fMRI). In 2015, they studied young adults by scanning their brains as they navigated a virtual environment. Participants possessing a genetic variant linked to Alzheimer’s showed diminished grid cell activity.

The discovery of the components of the brain’s GPS provided a fundamental understanding of how we navigate our world and offers a glimpse into how the brain computes. Through continued research funded by public and private institutions, scientists may develop new insights, and potentially new therapies, for Alzheimer’s disease, one of the most common and devastating degenerative brain diseases.

O'Keefe J and Dostrovsky J. The hippocampus as a spatial map. Preliminary evidence from unit activity in the freely-moving rat. Brain Research. 34: 171-175 (1971).

Ranck, JB. Head-direction cells in the deep cell layers of dorsal prescubiculum in freely moving rats. Poster presented at the meeting of the Society for Neuroscience, Anaheim, CA (1984).