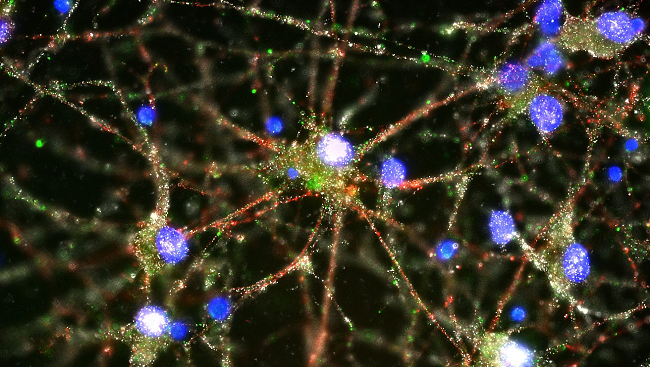 More than 100 regions of DNA have been linked to schizophrenia, including a gene that codes for an immune protein. This protein (stained green in the micrograph above) helps brain cells prune extra connections or synapses (red and white), indicating this process may go awry in schizophrenia.
Heather de Rivera (McCarroll lab).

While neuroscience is making strides in understanding mental illness, the almost-unfathomable complexity of the human brain makes the challenge great and each step of progress hard won. But today’s researchers are developing new tools and strategies in this important human endeavor.

The first successful treatment for psychosis arose from a moment of serendipity. In 1952, Henri Laborit was searching for medications to calm patients prior to surgery. The drug he chose to explore, chlorpromazine, worked so well he recommended it to his colleagues in psychiatry, who found that it diminished the hallucinations and delusions of schizophrenia. This discovery spawned the development of dozens of similar drugs. But more than 60 years later, the seemingly intractable nature of schizophrenia has produced a treatment stalemate — almost all accepted medications alter the same aspect of brain chemistry as chlorpromazine and do not touch schizophrenia’s disabling cognitive impairments. None of them alter the course of the disease.

Efforts to unlock the molecular underpinnings of schizophrenia — as well as other neurological disorders that emerge early in life like autism and bipolar disorder — have been stymied because living human brain tissue is rarely available for research and animals models, while useful, imperfectly mimic the disease.

Today, scientists are looking elsewhere — to patients’ genes. Knowing schizophrenia, autism, and bipolar disorder run in families, researchers are unraveling the genetics of these disorders, offering new clues about the molecular mechanisms and suggesting novel avenues for treatment.

“The clue that had always been sitting there was that these disorders were highly heritable,” says Steven Hyman, immediate past president of the Society for Neuroscience and director of the Stanley Center for Psychiatric Research at the Broad Institute. “The challenge has been that these illnesses are not caused by changes in one or a few genes, but by many small tweaks in a very large number of genes.”

Each gene variation represents only a small genetic “nudge” toward a disease, rather than a hard shove. Possessing a genetic variant linked to schizophrenia doesn’t guarantee a person will get the disease, and not every person with schizophrenia will have the same combination  of genetic variants. Because of that, one study may identify a certain group of genes that contribute to schizophrenia, while a separate study of a different group of people may implicate a somewhat different set  of genes.

“When you’re looking for needles in haystacks, the only way to succeed is by studying many tens of thousands of people,” Hyman says. Between the late 1980s and early 2000s, scientists made many attempts to find these genes, “but the technology was just not up to the challenge.” Part of that was due to the high cost of genome sequencing, where scientists determine the exact order of DNA’s chemical “letters.” Sequencing the first human genome, which was completed in 2003 as part of the Human Genome Project, cost $3 billion.

But now, owing to the success of the Human Genome Project, scientists can sequence the entire human genome for about $1,500, making it feasible to study a lot of people. And, they can scan an entire genome for particular genetic variants quickly and simply with DNA microarrays. A glass slide about the size of a postage stamp, a DNA microarray contains millions of DNA fragments arranged in a checkerboard pattern. After extracting DNA from blood or saliva, scientists apply it to the chip. If a person’s DNA matches a DNA fragment on the chip, they will bond, and by determining the genetic sequences that match, scientists can learn about a person’s risk for developing schizophrenia or other disorders.

In 2016, researchers at the Stanley Center found one of the genes most strongly linked to schizophrenia encoded an immune protein that helps brain cells remove weak connections, or synapses. This process, called synaptic pruning, helps refine the brain’s wiring during development, and the finding suggests this process may go awry in people with schizophrenia.

While this discovery might lead to new treatments in the future, it’s a process that takes decades, Hyman says. “But we have our first informative, actionable clues, which come from genetics.” The genes and the mechanisms behind the diseases — the needles in a haystack — are slowly beginning to come into view.