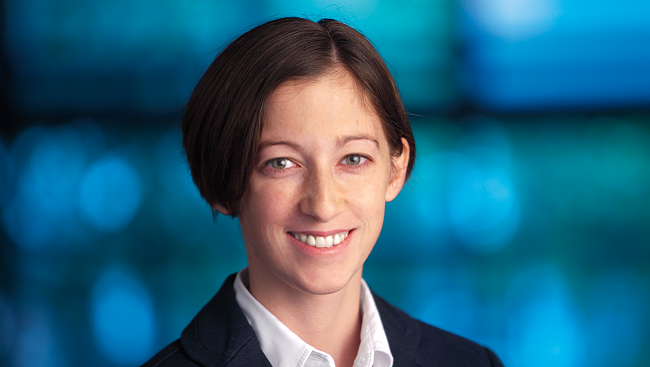 As an undergraduate, Danielle Bassett was driven by a passion for math and physics. But when a close friend attempted suicide, Bassett recognized that she could use her knowledge of physics and math to further what scientists understand about the brain.

Now an assistant professor of bioengineering at the University of Pennsylvania, Bassett borrows tools from physics to study how the brain is connected. In 2014, she received a prestigious MacArthur Fellowship, which is awarded to individuals whose work demonstrates exceptional creativity and promise for the future.

When did you decide you wanted to be a neuroscientist?

That’s hard. I always knew that I liked medicine as well as physics and math. I went to nursing school, but I quickly realized that I was not cut out emotionally to deal with people dying. My rounds on the cancer and pediatric wards reaffirmed this for me. I realized that I was better suited to study mathematics and physics.

Around this time, a very close friend of mine attempted suicide. Thankfully, it was just an attempt; it was not successful. After this, I started getting very interested in mental health in general and I decided what I’d really love to do is somehow meld my interest in physics and math with my interest in neuroscience to ask new questions in neuroscience.

What do math and physics have to do with the brain?

How does your lab use physics to study the brain

In our lab, we use neuroimaging data — data that’s acquired from a magnetic resonance imaging (MRI) machine or an electroencephalogram (EEG) — to study the parts of the brain that are communicating with one another during motor learning. For instance, in some of our studies, we ask participants to learn and perform a sequence of 10 to 12 finger movements while they are in the MRI scanner. From the brain activity data that we collect, we can study the patterns of communication among brain regions involved in motor learning.

The way that regions of the brain interact is kind of like being at a dance party. While you might start off an evening dancing with one person, after a certain period of time you might want to switch partners. Brain regions are constantly switching their partners in the dance of communication, allowing us to shift our thoughts and behavior from one moment to the next. By coming up with ways to mathematically represent communication patterns in the brain, we hope to gain insight into how networks of communication change during learning.

What has your research revealed about communication patterns in the brain?

On average, someone who’s flexible one day will also tend to be flexible on another day. However, even a person who has a brain that often shows patterns of great flexibility will have days that their brain is more rigid. We’re not sure what drives individual variation in brain flexibility from day to day.

What implications does your research have for human health?

We think it potentially has a lot of relevance for rehabilitation. In many cases of stroke, patients require the rehabilitation of the motor cortex (a region of the brain that helps to control voluntary movements) to enable movements again. In the future, we’d like to be able to use data from fMRI or EEG to predict whether someone is ready for rehabilitation training.

We’re also interested in ways to promote brain flexibility in patients who have experienced a stroke. We are currently testing whether stimulating certain regions of the brain might be able to enhance flexibility. We’re hoping that this could one day lead to new interventions in stroke therapy.

In addition, we think there are many other potential applications for this research outside of rehabilitation. We would eventually like to identify strategies and environments that help healthy people learn better.