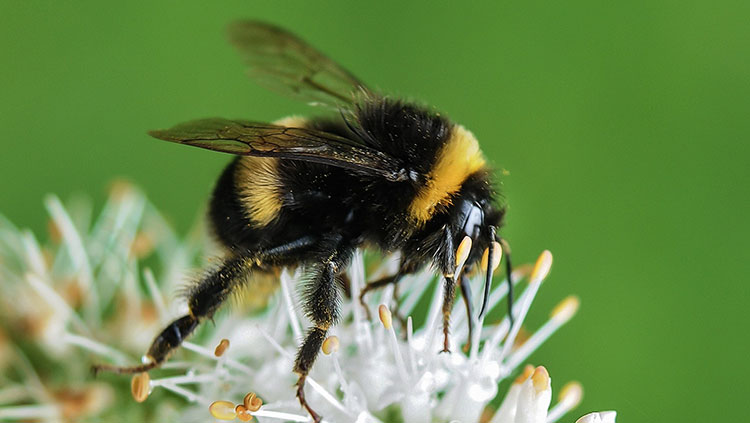 Photo by Skitterphoto from Pexels

These were the top neuroscience stories for the week of March 9, 2020.

Bumblebee populations are declining all over the world thanks in part to climate change, habitat loss, and disease. There’s more bad news: pesticide exposure harms brain development in baby bumblebees. In a study published March 4 in Proceedings of the Royal Society B, researchers had developing bumblebees nosh on nectar spiked with neonicotinoid, a common pesticide ingredient. Later, they scanned the baby bees’ brains using a micro-computed tomography (CT) scanner and tested their learning and memory performance. Pesticide exposure shrunk part of the brain involved in scent learning and memory, a paired structure unique to insects called the mushroom bodies. The bees also performed worse on a scent learning test, suggesting they may have trouble foraging for food.

Big picture: In people, exposure to pesticides in the womb or early in life has been linked to developmental problems and autism.

Alcoholics Anonymous has been around for more than 80 years. Yet, despite its popularity, there’s been little evidence showing it works better than other treatments for alcohol use disorder. A new systematic review of studies from the Cochrane Library finds the program produces higher rates of abstinence than other treatments, often a fraction of the cost. In the findings published March 11, researchers analyzed the results of 27 studies, which varied in their design and type of treatment investigated and included a total of 10,565 participants. Alcoholics Anonymous was found to be just as effective as other treatments, like cognitive behavioral therapy, in reducing the intensity of alcohol consumption and severity of addiction.

Big picture: Alcohol is the most abused substance. In the U.S., excessive alcohol consumption kills more people each year than all other recreational drugs combined. Learn more about the human cost of substance use disorders here.

Read more: Alcoholics Anonymous vs. Other Approaches: The Evidence Is Now In (The New York Times)