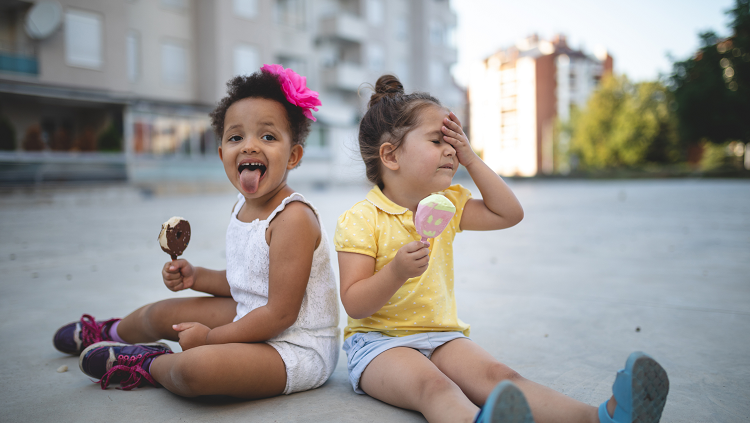 The scourge of summer, brain freeze can turn a delightful experience like ice cream into pure pain. Why does it happen?
iStock.com/FluxFactory

On a hot day, there’s nothing better than an ice-cold drink or a bowl of ice cream — except when you’re too eager to gulp it down, and suddenly your head feels like it’s on fire. Brain freeze, or ice cream headaches, is a rite of passage for childhood summers, but why do they happen? We asked neurologist Clifford Segil to explain why we get brain freeze, and how to fix it fast.

What is brain freeze, and what causes it?

The scientific term for brain freeze is phenopalatine ganglioneuralgia, which is a serious name for a not-very serious condition. Brain freeze is simply your body’s reaction to eating too-cold foods.

Your body and brain regulate a whole host of body functions, including temperature. If you’ve ever had a high fever, you know that a few degrees of difference can really have negative effects on your whole body. So, when you put something too cold in your mouth too quickly, your body’s first response is to warm yourself back up. This starts a cascade of reactions involved in brain freeze.

The body expands the blood vessels in the mouth, pushing blood to the area in order to heat it up. The quick change in blood vessel size and blood flow here is what causes pain. But it’s not just the vessels around your mouth that are affected.

Other vessels in the surrounding area may also grow or shrink, including in areas like the forehead and behind the eyes, in the area between the skull and the brain called the meninges. All these areas transmit pain signals to the brain through the trigeminal nerve, a nerve responsible for many operations in the face and head. So, when your brain receives these signals, you perceive pain not just at the source of the problem, but also in the front of the head as well.

Why we get brain freeze is a bit of a mystery. Obviously eating too-hot foods is more dangerous than eating too-cold foods, so it’s not as if your body is warning you about a real threat. We can’t know if there was a specific evolutionary benefit of brain freeze, but I would guess that it’s our body’s way of telling us to slow down.

And while the condition is associated with childhood, young brains aren’t necessarily more sus-ceptible to it — it’s more likely that children simply haven’t developed the habit of eating foods like ice cream slowly. And brain freeze even exists in the animal kingdom (such as cats), likely serving the same function — slowing down the consumption of cold foods.

How is it different from other types of headaches?

The main differences are in the symptoms. Take, for example, migraines, which are the most common type of headaches. Migraines are typically associated with pain on one side of the head or the other, nausea, sensitivity to light and noise, and sometimes blurry vision. Obviously if you’ve ever had brain freeze, none of those symptoms are present. But the pathway is similar. The trigeminal nerve is involved in both migraines and brain freeze, but in the case of brain freeze, it’s responding to a very fleeting event that fades quickly and doesn’t leave any lasting symptoms.

What’s the best way to stop a brain freeze?

You want to bring the temperature of your mouth back up to normal, so the blood vessels can shrink back to their neutral state. One proven way to do so is to press your tongue against the top of your mouth, where its heat will transfer into the tissue. Similarly, you can drink room-temperature water, which serves the same function.

But even if you don’t do either of those things, brain freeze typically lasts a few seconds to a few minutes, and it’s not dangerous — certainly not dangerous enough to deny ourselves the pleasure of ice cream.