Researchers Pinpoint Fear of Heights in the Brain 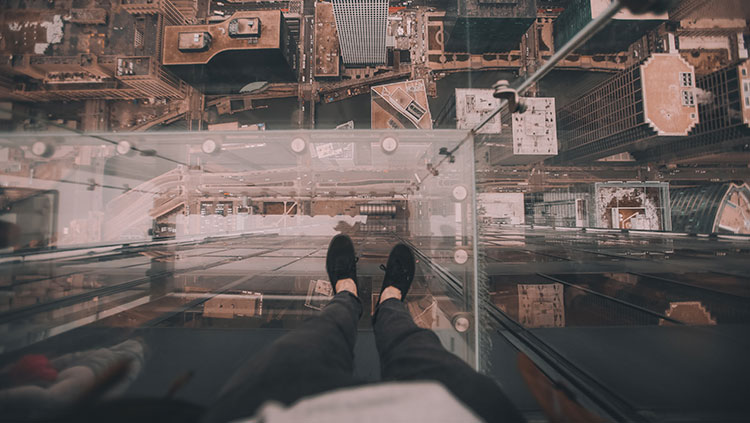 Photo by Tim Trad on Unsplash

If peering over the edge of a skyscraper observation deck makes your heart race and your stomach churn, you’re not alone. A fear of heights is a normal biological response designed to keep us safe. We don’t even need to take a few tumbles to learn to be afraid — studies in babies and young animals suggest our brains are wired to be wary of high places. But for a small number of people, this natural aversion morphs into a debilitating phobia that disrupts their day-to-day lives.

Researchers at Drexel University may have pinpointed the source of this fear in the brain. Working in mice, they found a cluster of cells that are selectively activated when the animals are placed on a high platform. The work was published in JNeurosci, and the team presented their findings concurrently at the Society for Neuroscience’s Global Connectome conference on January 12.

“Understanding how fear of heights is processed in the brain could provide insight into … such pathological disorders, as well as clinical implications for treatment,” said Dong Wang, senior author of the study.

Wang and his colleagues implanted electrodes into the brains of mice, targeting a region called the basolateral amygdala, or BLA. Previous studies established this region was involved in processing innate fears. When the team placed the mice on a platform about eight inches above the ground, the animals froze in place, their heart rates increased, and a small group of cells in the BLA activated. Those same cells fell silent once the animals were moved back to their cages. What’s more, these particular neurons remained silent when the animals faced other innately scary triggers such as loud sounds, an object looming overhead, and the scent of a cat. Each fear trigger activated a discrete set of neurons in the BLA.

“Together, these results indicate highly selective responses of BLA neurons to distinct fear stimuli,” said Jun Liu, a postdoctoral researcher in Wang’s lab and a coauthor of the study.

However, the height neurons also activated during a certain type of learned fear called contextual recall. The researchers placed mice in a cage with an electrified floor that delivered shocks. When they were placed in this cage at a later time, the mice froze and the heights neurons activated.

To Wang, this suggests the neurons process multiple sources of information about the environment. “Processing of contextual information seems to be highly plastic,” he said.

The team also found the intensity of the fear of heights response depended upon what the mice were exposed to. Mice, who spent a few minutes in a small “waiting room” before a door slid open, faced either an open-air platform or one enclosed with clear plastic walls. The height neurons fired a flurry of messages when mice were on the open-air platform; the enclosed platform elicited only a whisper of activity.

Neuroscientist Jacek Debiec, who wasn’t involved in the study, thinks more research is needed before we can conclude these neurons really encode fear of heights. For one thing, it’s impossible to know the animals’ internal state, as is the case with any animal study. Freezing and increased heart rate are conventional ways of measuring fear in the lab, but they’re indirect and not unique to fear. “I don’t know if I would call it ‘fear’ at this point,” the University of Michigan researcher said. And, it’s difficult to tease apart a fear of heights from mice’s natural aversion to being in an open, exposed place with no escape.

“But in terms of neurobiology and understanding how the animal is processing the environment, I think this study is really exciting,” he said. It “is very valuable because it tells us that there are some aspects of context [like] heights that are processed by the amygdala.”