The brain possesses its own special immune cells to guard against infection and injury. Tasked with destroying foreign invaders and cleaning up cellular debris, these cells, called microglia, keep the brain safe from harm. Until recently, scientists believed this was their only job and they otherwise whiled away most of their time “resting.” However, new research demonstrates these cells are never “off the clock” — not only are they active in the healthy brain, but they also help build the brain’s architecture during development, raising the possibility that dysfunctioning microglia might contribute to neurodevelopmental disorders like autism. 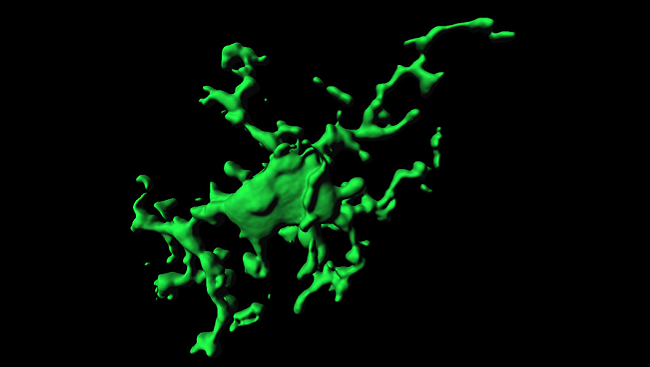 Microglia play a key role in brain development and maintenance. This a 3D model of one microglia cell produced by researchers.
Courtesy, with permission: EMBL/ R.Paolicelli

Microglia are the brain’s resident macrophages, which are the Pac-Men of the immune system, says Beth Stevens, a neuroscientist at Harvard University who studies how neurons and microglia interact in the developing brain.

By engulfing and devouring unwanted things in a process called phagocytosis, macrophages in the brain dispense with bacteria, damaged neurons, or a buildup of toxic proteins. Microglia detect and respond to chemical danger signals released by such detritus. For a long time scientists assumed microglia spent most of their time in an almost dormant state, inactive until roused by these danger signals.

However, over the past 10 years, pioneering imaging studies have upended that thinking. Previous research examining microglia in live mice inadvertently sounded the alarm for microglia because it required scientists to open the skull to look at the brain. The associated trauma flooded the brain with danger signals, making it hard to know exactly what microglia were doing in the healthy, uninjured brain.

In 2005, scientists at the Max Planck Institute in Germany got around this problem by carefully scraping a tiny (1 millimeter) patch on the mouse skull, thinning it just enough to peer inside the animal’s brain without damaging it. The mice were genetically altered so that their microglia glowed green under a fluorescent light, allowing scientists to film the cells with a microscope. The videos revealed that while the cell bodies (soma) of the microglia were stationary, their branched arms were constantly reaching and retracting, scanning the surrounding environment for the first signs of trouble. The researchers estimated microglia collectively scanned the entire brain once every few hours.

In 2009, researchers in Japan performed a similar experiment and found microglia were monitoring synapses, the points of contact between neurons. A microglia arm would touch a synapse and stay there for a few minutes before moving on to the next. But when the researchers injected the mice with a toxin that blocks neurons from firing, they found microglia contacted only half as many synapses as before. And when they temporarily blocked blood flow to the brain, microglia arms wrapped around synapses and held onto them for more than an hour, after which time a quarter of these synapses vanished.

These and other studies suggested microglia were more than the brain’s housekeepers — they were instead vigilant surveyors that not only monitored the health of synapses but might also be involved in removing them.

To Stevens, these studies were the first clue that microglia might be involved in brain development, a time when lots of synapses are eliminated or pruned.

“Pruning is important because it’s a way by which you get precise synaptic circuitry,” she says. Early on, our brains have an overabundance of synapses, many more than will survive into adulthood. Depending on our environment and our experiences, some synapses will be more active and grow stronger while less useful ones will be pruned. It’s “use it or lose it,” Stevens says.

Insights from her own research also hinted at microglia’s involvement in synaptic pruning. For one, during periods of significant pruning and remodeling in the developing brain, microglia abandoned the highly branched shape characteristic of the surveillance state and took on an amoeboid shape associated with phagocytosis. For another, proper pruning required immune molecules called complement proteins. In the immune system, these proteins act as “eat me” signals, coating pathogens and debris and instructing macrophages to gobble them up.

Maybe it was the case, Stevens reasoned, that complement proteins were tagging the weak synapses in the developing brain and that microglia — the brain’s macrophages — were “eating” them. A 2012 study from Stevens’ lab showed this was exactly what was happening. Her lab investigated the neurons from the retina that link up with the thalamus, the brain’s relay station for sensory information. These neurons make lots of connections at first, but many are later pruned as visual circuits are refined. When the researchers labeled these neurons and microglia in mice, they saw microglia were engulfing lots of synapses at about the same time that pruning peaked.

Next they studied mice missing the receptor for complement protein, a receptor found only on microglia.

“When we did this, we showed that microglia are only about half as good at eating synapses,” Stevens says. As a result, the mice had more synapses, an abnormality that persisted into adulthood.

Around the same time, researchers in Italy found microglia helped prune synapses in the mouse hippocampus, an area of the brain involved in learning and memory. “This suggested that it wasn’t just the visual system and this might be a broader mechanism by which synapses get sculpted,” Stevens says.

Eliminating extra synapses is an important step in fine-tuning the brain’s circuits, and we now know microglia play a critical role. But what happens if microglia don’t eat synapses like they’re supposed to?

Many scientists speculate defective or incomplete pruning may contribute to developmental disorders like autism, as some studies indicate too many synapses exist in the autistic brain. There are also hints that microglia are dysfunctional in some individuals with autism, but it’s not clear whether this contributes to brain and behavioral abnormalities or is a byproduct of some other change, Stevens says. A 2014 study in mice offers some clues: undermining microglia’s ability to prune synapses in the developing mouse brain causes neurons to wire up in a way that echoes what is seen in autism.  Mice with impaired signaling between microglia and neurons showed defective pruning and brain regions failed to link up to one another properly. What’s more, the mice exhibited hallmark behaviors of autism: repetitive, restricted behavior (in the form of excessive grooming) and deficits in social interaction.

Microglia research is still in its infancy, and microglia’s role in development and autism is far from being hammered down. It’s only been a decade since scientists first showed microglia were continuously scanning the brain and monitoring the health of synapses. In the meantime, we’ve established microglia’s essential role in pruning synapses during development, when the brain’s circuits are fine-tuned. And in the years to come we may uncover new roles for the cells once thought to be nothing more than the brain’s housekeepers.