What is Obsessive Compulsive Disorder?

Our thoughts are often mysterious to us. You probably don’t know why you suddenly think about a Komodo dragon while sitting in traffic or Citizen Kane while shopping for groceries. Such moments remind us that we are each the emergent property of an amazingly complex organ that never stops surprising us. Nonetheless, we usually feel in control of our thoughts. Even with the occasional unexpected thought, life continues as normal.

Yet, this is not so for people with obsessive compulsive disorder, or OCD. February 20th-26th is OCD Action Week, a week dedicated to spreading awareness of and discussing OCD on various social media platforms, organized by the UK charity, OCD Action. What is OCD really like, and how can neuroscience help us understand and treat this mental illness?

Used informally, “obsessive-compulsive” is often slang for perfectionism or meticulous attention to detail. So, are people with OCD simply meticulous perfectionists? As a psychiatric disorder, OCD is only diagnosed if a person’s obsessions and compulsions substantially interfere with his or her daily life. Obsessions are intrusive thoughts or worries that the person with OCD often knows are excessive or irrational but experiences nonetheless. Compulsions are rituals the person feels compelled to perform, often to ease the distress brought on by obsessions.

While popular examples of OCD behavior are often extravagant or bizarre, common manifestations may be more prosaic. Contributing to an image of eccentric rituals in OCD are stories of the famous nineteenth-century inventor Nikola Tesla, widely believed to have suffered from OCD. Tesla had obsessive fears of germs, hair, and round objects, which he is said to have combated with idiosyncratic rituals involving the number three, such as walking around a block three times before entering a building or receiving objects in multiples of three. While people with OCD may indeed feel the need to perform rituals a particular number of times to alleviate their obsessions, OCD rituals are often commonplace behaviors performed compulsively. For instance, though hand washing is normally a healthy behavior, a person with OCD and an obsessive fear of germs might wash his hands to point of rubbing his skin raw.

Rituals are hallmarks of OCD in popular culture, yet some people with OCD have rituals that are difficult to observe or largely internal. This form of OCD is termed primarily obsessional OCD, or, informally, “pure-O.” While the lack of observable rituals might make primarily obsessional OCD sound less severe, it is often one of most impairing forms of OCD, as it generally involves dark worries and doubts about one’s identity. For instance, while stopped in her car at a traffic light, a person with primarily obsessional OCD named Sara might see a pedestrian cross the street and wonder, “What would happen if my foot hit the gas pedal?” While someone else might shrug this off as a random thought not reflecting any real intention of causing harm, Sara might instead wonder if she is a latent psychopath. Sara might compulsively engage in mental “checking,” such as going for a drive to see if similar thoughts reoccur, or watching horror movies to see if she identifies with the serial killer. In fact, such OCD obsessions are almost always the exact opposite of the person’s true personality and behavior. Nonetheless, Sara may feel hopeless because she cannot convince herself with absolute certainty that she is not a psychopath. Sara and others may also be reluctant to seek treatment for fear that the obsessive thoughts will be mistaken for real intentions of hurting a person.

Sam Harris, a bestselling writer and speaker who received his PhD in neuroscience from the University of California, Los Angeles in 2009, often emphasizes that we are not the authors of own thoughts. When thinking, we do not consciously select each word or image that comes to mind, unless perhaps we are carefully writing a paper or practicing a new language. If we consciously selected each word or image, thought and speech would be a slow, tedious process. Often, the reason for a particular thought or word that comes to mind eludes us. And yet, most of us feel a sense of authorship over our thoughts, even if this authorship is an illusion, an after-the-fact explanation for why the thought occurred. Why, then, do people with OCD experience some thoughts as intrusive? What causes thoughts that cannot be owned or embraced, but instead cause such profound discomfort? What is happening in the brain of a person with OCD? 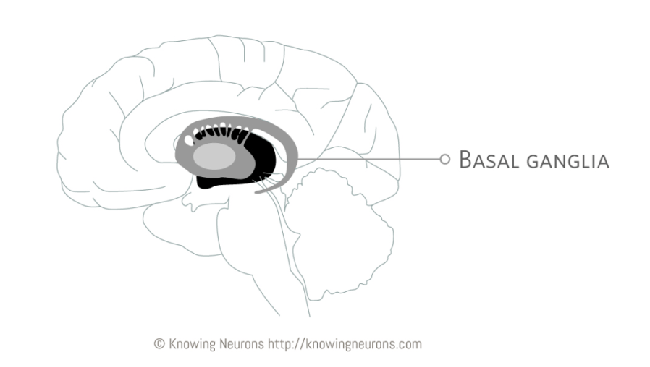 Problems with the basal ganglia, located deep inside the brain, are often associated with OCD.
Knowing Neurons

So, what does the basal ganglia have to do with obsessions and compulsions? In addition to the motor cortex, the basal ganglia and thalamus also form many loops with the prefrontal cortex. Because the prefrontal cortex is involved in planning, thinking, and awareness, it is possible that the basal ganglia is also responsible for facilitating wanted thoughts and stopping unwanted thoughts. In this view, OCD is a sort of cognitive hemiballismus where instead of unwated movements, the person experiences unwanted thoughts. As evidence for this theory, the correlations between cortical brain activity and basal ganglia brain activity are different in people with OCD and healthy individuals. Furthermore, OCD symptoms can also be improved in humans by stimulating a part of the basal ganglia called the subthalamic nucleus. In fact, both the severity of symptoms and their improvement with stimulation relate to neuronal firing in the subthalamic nucleus.

A further test of the above hypothesis would be to use neuroimaging to compare basal ganglia activity in people with OCD and people with a related disorder, obsessive compulsive personality disorder or OCPD. While both people with OCPD and OCD have obsessions and compulsions that interfere with daily living, a person with OCPD does not experience these thoughts and rituals as intrusive but rather as part of his or her personality, suggesting different roles for the basal ganglia in each disorder.

While we like to think we are in control of our thoughts and behaviors, a secret agent in our brain pulls strings behind the scenes. Sam Harris’s comments that we cannot control our thoughts have been made in the context of his argument that none of us have free will. Viewing the brain as a biological computer, Harris is right. Yet there is also what the philosopher and cognitive scientist Daniel Dennett calls free will “worth wanting,” the comfort we feel when our thoughts and actions agree with our sense of identity and agency. People with OCD cannot obtain this harmony without help. Through studying the brain, we offer these individuals hope that treatments are within reach.