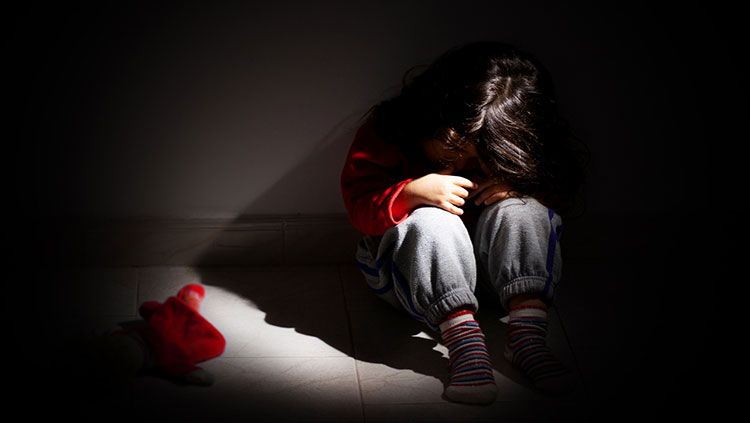 Before you were 18, did a parent or other adult in your household ever push, grab, shove or slap you?

Was a household member depressed or mentally ill?

Did a household member go to prison?

These are just a sampling of the questions asked in a landmark study of 17,337 middle-aged adults that began in the late 1990s. The work showed researchers for the first time just how common adverse childhood experiences, as they’re termed, truly are: Nearly two-thirds of the group of mostly white, middle-class people from the San Diego area had experienced at least one type of physical or psychological trauma included in the survey. Twelve percent had been through four or more.

But the biggest surprise from the study was that adverse childhood experiences, or ACEs, didn’t just lead to emotional and psychological ill effects, such as depression, later in life: People who had more traumatic experiences were also more likely as adults to have heart disease, cancer and a host of other health problems. And though people with higher ACE scores are more likely to smoke and suffer from alcoholism and drug abuse, behavioral factors don’t fully account for these increased disease risks.

Follow-up studies over the last 20 years have confirmed these findings and found links to other conditions, including type 2 diabetes and autoimmune disorders. Recent work has shown that ACEs can start to affect health even in childhood, increasing risks for asthma, cognitive delays, hormone imbalances, sleep disturbances, obesity and frequent infections.

Such work reveals that childhood adversity is a major public health issue. “Once you start understanding the prevalence of adversity in the general population, you can’t unsee it,” says Phil Fisher, a psychologist at the University of Oregon.

Fisher and other researchers are now working to understand why ACEs have such impacts on physical health. Childhood adversity, they are finding, has lasting effects on stress hormones, inflammation, brain development and gene regulation. By identifying such measurable physical changes, or biomarkers, the scientists hope to be able to pinpoint which kids are at greatest risk of long-term health effects — and provide a metric for studying the effects of treatments such as specialized therapies.

“The biomarkers can really help us to have a lot more precision in the ways that we provide support,” Fisher says. Already, the evidence has led many pediatricians to screen all their patients for ACEs. 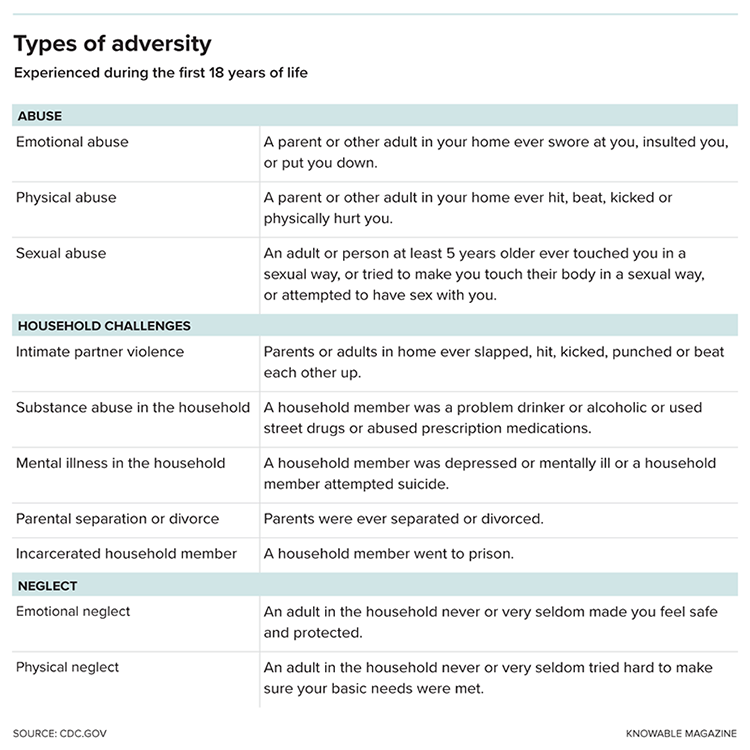 In a landmark study begun in the 1990s, researchers asked adults about their home lives as children to identify the frequency of adverse childhood experiences (ACEs). The questions were later expanded to the list above, to include various types of neglect in addition to abuse and household challenges. Researchers who study how ACEs affect biology and health now recognize that the body reacts differently to different types of trauma.

One of the pathways linking adversity to physical illness involves the stress hormone cortisol, which plays a central role in the body’s fight-or-flight response. During infancy, interactions with parents and other caregivers shape the ways our bodies handle stress. When a newborn is hungry or scared, a flood of cortisol and other hormones causes the baby to cry out. When a caregiver soothes him or her, that experience helps teach the young brain how to turn the stress pathway off again.

But when care is absent or unpredictable, the system develops out of whack. Chemical tags called epigenetic marks can turn genes off or on. Put in the wrong place, these tags can cause the cortisol system to respond inappropriately to stress.

When child clinical psychologist Nicole Bush first heard that neglect and trauma imprint themselves onto our genes, it made perfect sense to her. At the time, Bush was a clinical intern in Chicago studying children from high-crime, low-resource neighborhoods. And something about these kids stuck out to her.

“All I could think about was that these children seemed to be physiologically different,” she says. They seemed on edge, overly sensitive to noises or minor distractions and more easily frustrated than other kids. They showed signs of stress like flushed faces or rapid breathing after small setbacks, and took more time to calm down. Bush realized that these were all symptoms of an overactive fight-or-flight system, and that these effects might be biologically measurable.

Bush now runs a study at the Child Trauma Research Center of the University of California, San Francisco, in search of those measurable biomarkers. She started out studying epigenetic marks on certain stress-related genes, but has since broadened her approach to include protein and genetic markers of inflammation, cellular aging and more.

For example, Bush’s team is using an epigenetic “clock” that estimates how much cells have aged based on epigenetic tagging patterns at 94 sites across the genome. Other such epigenetic clocks that were designed around adult samples have found a link between childhood adversity and advanced epigenetic age in adulthood, which is typically correlated with worse health. Bush is testing whether the same holds true for children using the new clock, which was designed around subjects up to 20 years old. 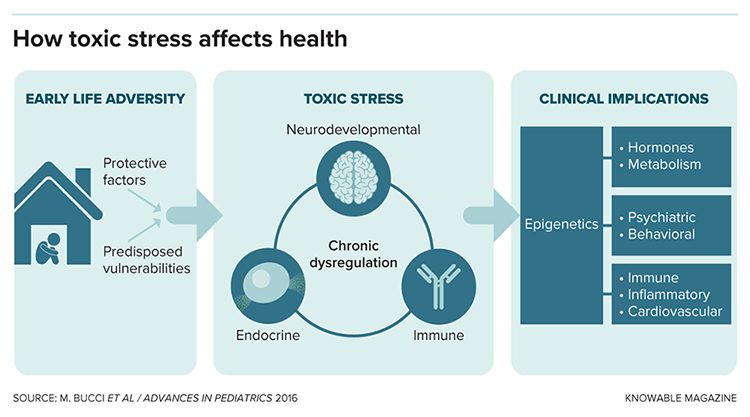 Trauma and excessive adversity during childhood affect the body in several measurable ways, collectively termed “toxic stress.”  These include changes to stress hormone regulation, neurodevelopment and immune function. Many of these effects occur at the level of gene activity and are carried into adulthood thanks to chemical (epigenetic) changes that switch genes on and off. Toxic stress can affect behavior and psychology, as well as increase the risk for physical conditions such as inflammatory and cardiovascular diseases.

Other research groups are studying oxidative stress — the accumulation of highly reactive chemicals called free radicals that can damage DNA and cell structures. Usually, scavenger proteins within our cells can keep that burden down, but recent work with both animal experiments and adult people suggests that this system falters in response to excessive stress.

Fisher’s team recently published a pilot study examining a marker of oxidative stress called F2t-isoprostanes (IsoPs) in urine from 50 teenage girls who had experienced ACEs. Those with four or more ACEs had higher levels of IsoPs, the scientists found. The difference was small, and only significant in some analyses, but it’s an area Fisher says his team will keep exploring.

Researchers are also searching for biomarkers in the immune system that link ACEs to disease. High levels of inflammatory biomarkers such as the immune signaling molecule C-reactive protein have been found among adults with a history of ACEs. Such inflammation, when it’s ongoing, or chronic, is known to contribute to health problems such as depression, cardiovascular disease and autoimmunity.

Similar associations are now being found in children. For example, a study that follows the health of twins who were born in the UK in 1994 and 1995 — called the E-Risk Longitudinal Twin Study — found elevated C-reactive protein in 12-year-olds with depression and a history of physical or sexual abuse. Six years later, the same study found that C-reactive protein levels remained high in the now-18-year-old young women who had a history of ACEs. (Young men no longer showed this pattern, for unknown reasons.)

Distinctions like these are vital for making biomarkers clinically useful, says Jack Shonkoff, a pediatric researcher at Harvard University. Shonkoff chairs the JBP Research Network on Toxic Stress, which is developing a suite of biomarkers to gauge excessive stress activation in children.

In 2019, researchers in Shonkoff’s network began measuring stress hormones from hair and saliva, and inflammatory and oxidative stress markers from blood, in 17 pediatric practices across the US. They also collected cheek swabs to do genetic and epigenetic analysis.

The next step will be to expand the study to 6,000 children aged 5 or younger from a diverse mix of backgrounds, with the aim of defining normal ranges for the biomarkers. From there, Shonkoff says, the team hopes to look for variations that track with exposure to different kinds of adversity.

Eventually, researchers hope they can find ways to reverse the effects of adversity on the body. Already, some results hint that this may be possible, as Fisher explores in an article in the 2016 Annual Review of Clinical Psychology. More than a decade ago, for example, his team found that the salivary cortisol levels of 57 children in foster care reverted to normal after a specialized treatment program that included play therapy, extra training for foster parents and follow-up care. More recently, the team reported that this renormalizing effect on cortisol continued for at least six years in a couple dozen kids who remained in the study.

Just as there is variation in response to trauma, there will be variation in response to treatment, Shonkoff says. There are many types of therapies to choose from: group-based or family-based, some incorporating cognitive behavior therapy or physical activity. “We can’t just ask, ‘What’s the best program?’ — just like you can’t say, ‘What’s the best treatment for cancer?’” he says. Biomarkers could help sort out which interventions are best for which kids.

Bush’s team, for example, collected blood and saliva from 50 caregivers and their 2- to 6-year-old children who experienced trauma. The kids and parents participated in an intensive psychotherapy treatment aimed at improving parent-child relationships and child mental health. Bush says the findings, which are still to be published, suggest that kids and parents are less likely to respond to the treatment if the caregivers begin the program with high levels of a set of biomarkers of inflammation.

“There’s something about that inflammation that’s preventing families from learning and adapting and changing their mental and behavioral health,” she says. So far, the team has only analyzed the adults’ samples, but is now starting to measure the same inflammatory markers in samples from children, as well as cortisol levels, epigenetic changes and markers of oxidative stress. 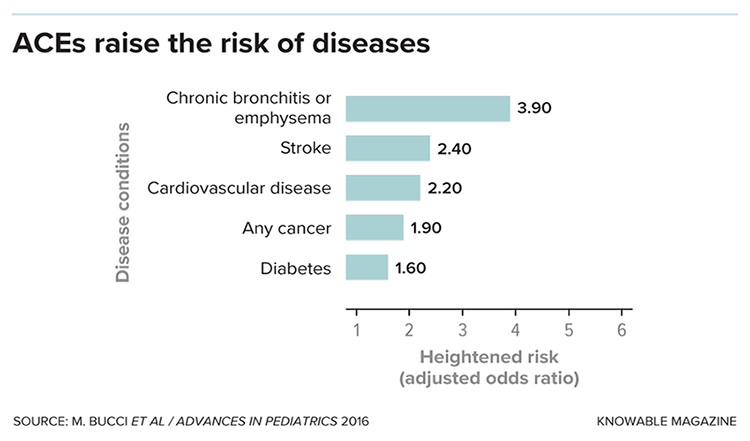 Experiencing four or more adverse childhood experiences significantly ups the risk of developing certain diseases later in life. The bars indicate how many times more common a disease is among people with four or more ACEs: People who had this number of ACEs are 2.2 times more likely to develop cardiovascular disease, for example.

Building a panel of reliable biomarkers will help researchers address the big question around treatment for ACEs: Does reversing abnormal biomarkers actually improve health? For example, will a child whose inflammatory markers are brought down have fewer asthma attacks? Does addressing ACEs during childhood reduce the risks of adulthood diseases? These questions will take decades more to fully answer.

In California, where screening for ACEs has expanded thanks to Medicaid reimbursement, researchers have started analyzing blood and saliva samples from hundreds of children between 3 months and 11 years old who were also screened for ACEs. This effort aims to link ACE scores and overall health with biomarkers such as hormones, immune-related proteins and epigenetic changes. This will allow the team, based at UCSF Benioff Children’s Hospital Oakland, to explore whether stress-reduction programs or other supportive interventions lead to improvements in the biomarkers and long-term mental and physical health, says Monica Bucci, a neuroscientist at the Center for Youth Wellness in San Francisco.

Even before those effects are understood, screening for ACEs may prove beneficial on its own, because it makes parents aware of the health risks their children may be facing, and encourages lifestyle changes that could help to lessen them. “It’s important to start moving the needle,” Bucci says. “Then the science will come.” 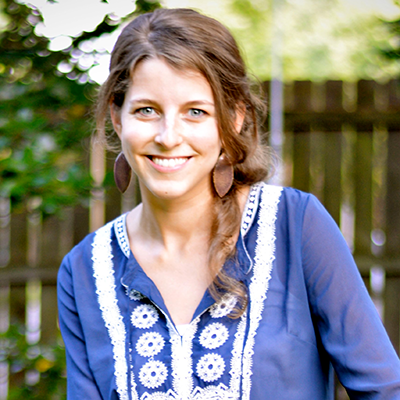 Amanda Keener is a freelance science journalist living in Littleton, Colorado, who’s fascinated by how the human body remembers life experiences. Find links to her other stories at amandabkeener.com and tweets at @ImmYOUnology.