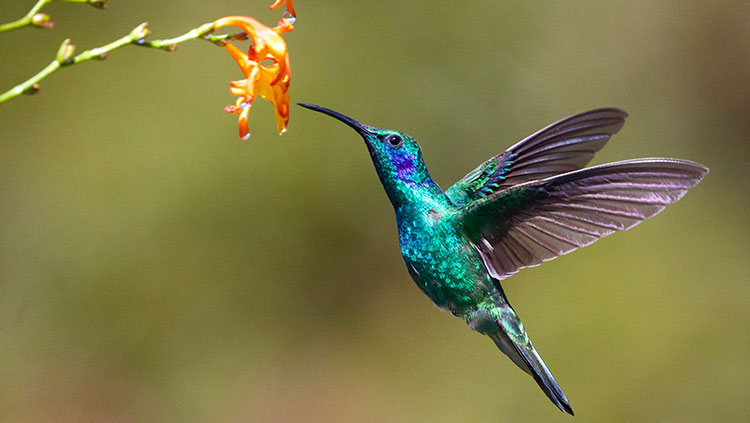 Photo by James Wainscoat on Unsplash

Hummingbirds see a rainbow of ultraviolet colors that we can’t even begin to imagine, researchers reported June 15 in Proceedings of the National Academy of Sciences. Birds possess four types of color-sensing cone cells in their retinas, including one attuned to ultraviolet light. But do the birds perceive unique mixes of UV and non-UV colors — for example, does the color red plus UV light look wholly different from red alone? To find out, the researchers trained wild hummingbirds to perform a vision test in a Colorado meadow. They set up two plastic saucers, one containing sugar water and the other plain water. The saucers were equipped with programmable LED lights; one saucer emitted a color from the visible light spectrum, and the other emitted the same color plus UV light. (They ran multiple tests over a three-year period, changing the colors of the LED lights, which saucer contained sugar water, as well as the physical locations of the saucers.) They counted the number of visits to the sugar water and found the hummingbirds could easily discern between the colored saucers.

Related: What Can Animals Sense That We Can’t?

Stimulating smell-processing neurons in mice brains tricks the animals into smelling things that aren’t really there, researchers reported June 19 in Science. The mice were bred to express light-sensitive ion channels in their olfactory bulbs, clusters of nerve cells that process smells. Using a technique called optogenetics, researchers can turn neurons on and off using lasers. Stimulating specific neurons in a particular sequence created the perception of a unique smell, which the mice learned to associate with a drink of water. By tweaking the stimulation — stimulating one neuron instead of another, for example, or altering the sequence — the researchers found cells stimulated early in the sequence were the most important part of the neural code for the smell perception.

Related: How Taste and Smell Work