Why do we remember some things but not others? The answer relates to the process of how our brains encode, store, and retrieve memories. We are more likely to remember something based on how much attention we’re giving it, how engaged we are, and our level of investment in a particular experience. Input from our senses gets stored with memories, too — all contributing to how memorable something may be.

Many of us can remember what it was like to ride a bike for the first time but can't seem to remember why we entered a room, or the name of a person you just met. Why do we remember some things and not others? The answer lies in our memory. Let's first understand how memories form.

[There] are two types of memory. Declarative memory is the memory for facts, datas, and events, like remembering that time you fell during the school play. Non-declarative memory, on the other hand, is memory that is stored and received without conscious effort, like knowing how to speak or riding a bike.

But how do you actually have memories? A simple way to think about the process of memory is to think of your brain as a huge and messy filing cabinet, and your memories are folders. And each of the sensory inputs are files that go into those folders.

Memory is a simple three-step process: encoding, storage, and retrieval. During the encoding step, your brain receives information from each of your senses and passes it on to the hippocampus, where a neural network of synapses compile all of this into a memory. These synapses have the ability to remodel themselves, which is called synaptic plasticity. Encoding a new memory involves many changes, and the number and shapes of synapses and the amount of the neurotransmitter glutamate is released. Increasing the long-term potentiation, or LTP, of synapses by taking breaks, can help improve our memory.

Storage: Memories are stored throughout the brain, and neurons are primed to fire together in the same pattern that originally created the experience. As the saying goes, neurons that fire together, wire together. In case someone accidentally wiped out a part of your brain, there is still a likely chance you will have multiple memories, since there are many pathways in various regions of the brain that have continuously encoded a specific memory.

Finally, retrieval: Human memory retrieval is truly amazing, unless you're taking a test of course. It requires you to revisit the neuronal pathway that was formed earlier. You may retrieve a memory by recognizing, so looking at your uncle Bob's face and remembering that he's your uncle Bob.

Now the question remains, how do we lose our memories? Memories are encoded most strongly when we're paying attention, when we're deeply engaged, and when information is meaningful to us. That's why it's easy to forget why we entered a room, as you may not have been paying much attention.

Mental and physical health problems also interfere with our ability to pay attention. People who are depressed are 40% more likely to develop memory problems, as they are not able to focus on the present and are less attentive to new information.

In terms of losing memories in the long term, one key factor is age. Our synapses lose their strength and begin to wear out, which affects the ease in which we can recollect our memories. Scientists have several theories as to why our memory is deteriorating, such as the decay theory, which proposes that memory fades simply from the passage of time. Hence, as time passes, and memory strength declines, there is less available information. The hippocampus loses 5% of its neurons every decade for a total loss of 20% by the time you're 80 years old. And neurotransmitter production decreases, especially acetylcholine, which is vital to learning and memory.

How people retrieve stored information seems to be affected by these changes. It's important to stay active and keep our brains engaged if we want to keep our memories sharp. 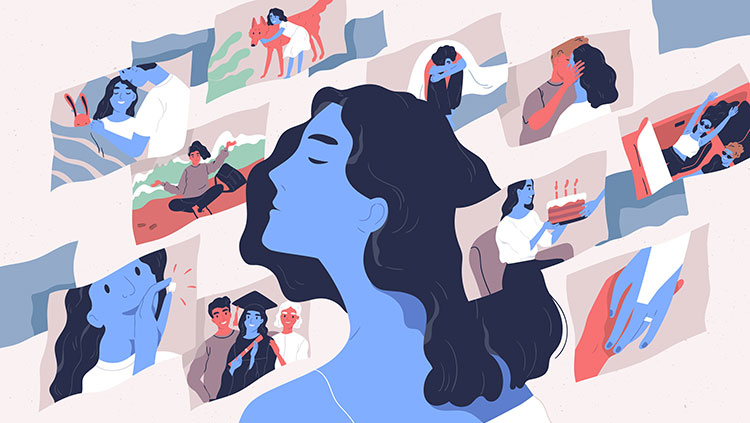 The Search for the Engram: Where Memory Lives in the Brain