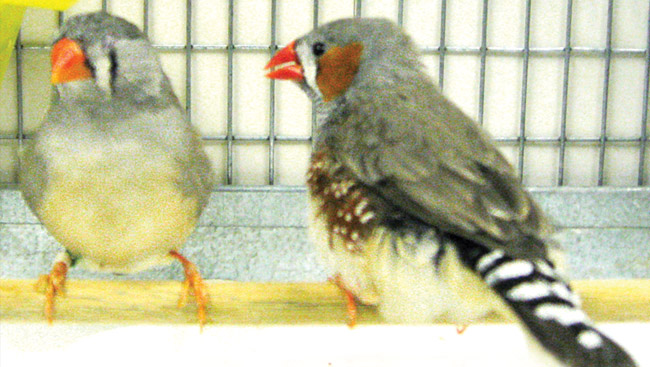 Researchers are investigating how the songbird brain generates vocal behaviors to understand motor learning, and how social signals can influence learning in all animals.
Courtesy, with permission: Mimi Kao and Allison Doupe, University of California, San Francisco.

Birdsong is teaching us a lot about the organization of the human brain and its amazing capacity to learn skills like language. Like humans learning to speak, birds must hear the song of adults during a critical period and then hear their own voices while learning to sing or chirp. Researchers identified a brain pathway that is important for birdsong and may shed new light on both language and motor learning in humans.

An adult male zebra finch (right) is singing his learned song directly at the female (left). Researchers are investigating how the songbird brain generates vocal behaviors to understand motor learning, and how social signals can influence learning in all animals.

“Bird brain” might not be such an insult after all. Indeed, songbirds are teaching researchers a lot about the human brain. For instance, research on songbirds is shedding light on how children learn to speak.

Surprisingly there are few examples of vocal learning in the animal kingdom. Although many animals produce sounds, few learn to make those sounds based on auditory experience during development. Humans, dolphins, whales, and some bats are the only mammals known to learn vocalizations in this way.

Advances in songbird research are leading to:

Learning to produce sounds is a motor skill similar to learning to play tennis or piano. Vocal learning, like other forms of motor learning, requires sensory feedback so individuals can adjust and perfect their performances. Children progress from babbling to speaking and songbirds progress from chirping to singing in much the same way as people perfect their golf swings — practice, practice, practice.

In humans and songbirds, similar networks of brain structures are involved in motor learning. Like humans, songbirds possess a group of brain structures that together are called the basal ganglia. The basal ganglia receives information from cortical regions of the brain and passes it on to other brain structures, forming a circuit that is important for learning and controlling movements. Researchers identified a specific cortico-basal ganglia (CBG) circuit in songbirds that plays a special role in learning to sing. If a lesion is introduced in this circuit when a bird is young, it disrupts the bird’s ability to sing or ever acquire a song.

Although scientists once thought that the CBG circuit in songbirds was only important to song learning during development, they have since discovered another important role — this circuit is essential in changing or varying song during adulthood. This “behavioral variability” is essential to honing motor skills, such as singing in birds or playing sports in humans, through a process of trial-and-error.

Research in the zebra finch, a songbird with bright orange cheeks and native to Australia, shows that social signals can influence this process. When an adult male zebra finch sings alone, the brain cell activity in his CBG circuit is variable and so is his song behavior. But when a female zebra finch is nearby, the male sings the same song in a very set way, and brain cell activity in the CBG pathway becomes more predictable.

By tracking down how the songbird brain generates these different vocal behaviors, researchers are learning a great deal about what limits or enables motor learning throughout life, and how social signals can powerfully influence learning in all animals, especially highly social creatures like ourselves.