Obesity and the Brain 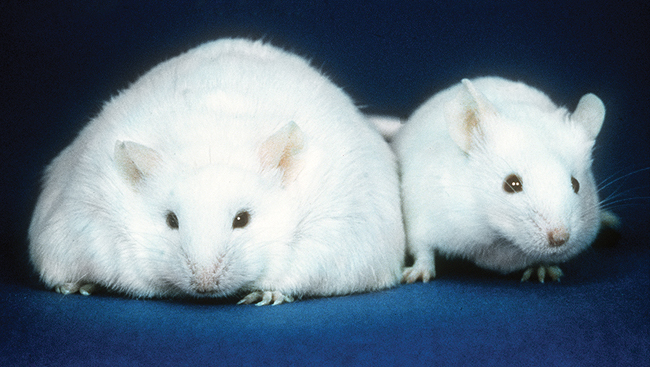 Some mice are naturally obese due to an inherited genetic mutation that causes them to eat excessively. Although the mutant mice are normal-sized when born, they may eventually weigh as much as three times more than unaffected mice. Researchers’ studies of these animals led to the discovery of the hormone leptin, which helps control appetite.
Courtesy of Oak Ridge National Laboratory, U.S. Department of Energy. 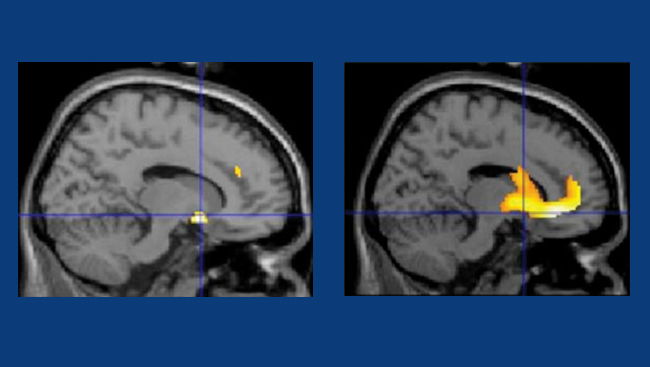 Brain scans show that when people view images of appetizing foods (right), there is more activity in the striatum — a brain region associated with reward — than when the foods are distasteful (left). This image shows brain activity in a teenager with deficiencies in the hormone leptin, which helps control appetite. After taking leptin supplements, his brain responses show this normal pattern of activation (above).
Published with permission of Paul C. Fletcher and Sadaf Farooqi, University of Cambridge. © 2007. 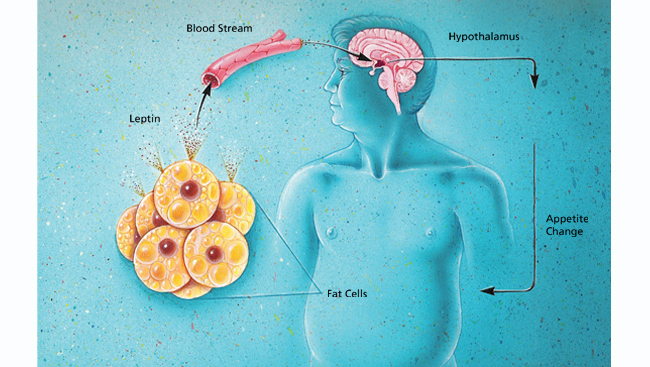 Fat cells produce a hormone called leptin, which travels through the body’s blood stream and acts on a brain region called the hypothalamus. Leptin helps to regulate appetite and metabolism. A lack of leptin, or its receptor in the brain, can lead to uncontrolled food intake and obesity.
©1997 Society for Neuroscience, Illustration by Lydia Kibiuk 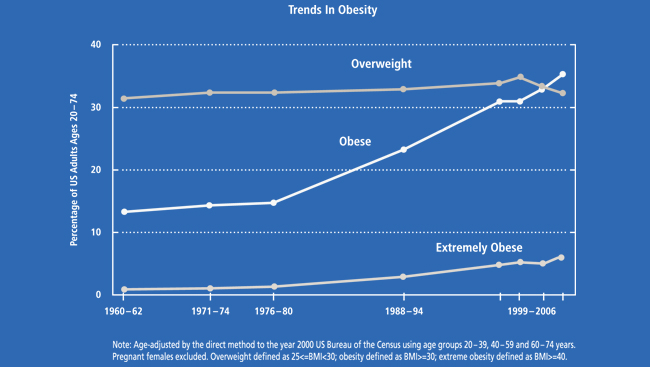 Studies show that rates of obesity are increasing rapidly. About two-thirds of adults in the United States are now overweight, obese, or extremely obese, according to data from the Centers for Disease Control and Prevention.
Courtesy of the National Center for Health Statistics Health E-Stats, December 2008.

Brain research is helping to identify what causes obesity, as well as how to curb an epidemic and promote wellness.

Studies of feeding behavior in animals and people have led neuroscientists to discover that complex systems in the brain, not just the intestine, determine food intake. More research about how genes, chemicals, and the environment interact and control our urge to eat could help curb an obesity epidemic.

In the last 30 years, the prevalence of obesity has doubled in children and quadrupled in adolescents.. The human body is so devoted to warding off potential starvation that in a society of plenty, innate weight-control mechanisms may harm more than they help. With excessive body weight comes a host of medical dangers, at a price of more than $140 billion a year in U.S. health-care costs.

Fat mice and the first insights into obesity

Weight control used to be considered a simple matter of willpower: you versus food. Researchers now know that controlling body weight is a complex process influenced by genes and regulated by the brain.

A Tale of Two Mice

In the early 1900s, doctors noticed that patients of normal weight who suffered damage in a brain region called the hypothalamus often became obese or gaunt after injury. This observation led researchers to suspect that the brain controls weight gain and loss.

Solid evidence that specific brain chemicals regulate weight came many years later, in the 1970s. Researchers thought a molecule that travels through the blood to the brain might determine whether an animal feels stuffed or ravenous. To find out, they studied mice that were naturally obese because of a rare genetic mutation. When these mice were exposed to chemicals in the blood of other types of mice, the obese mice ate less and lost weight. These findings suggested that unlike normal mice, the obese mice lacked a hormone that made them feel full.

Of Mice and Men

Researchers identified this hormone 20 years later by isolating the gene that was mutated in the obese mice. The gene produced a protein called leptin that is made in fat cells. Because of the mutation, the mice could not make functional leptin. When treated with leptin, their appetites decreased and metabolism increased, causing them to lose weight.

Because humans also produce leptin, researchers hoped giving the hormone to obese people would result in weight loss. However, leptin did not turn out to be the amazing cure-all for which scientists, physicians, and patients had hoped. In a clinical trial, it did help three obese children lose weight, but they had an extremely rare form of obesity: like the mice studied in the lab, these children had a leptin deficiency caused by a rare mutation.

Although these findings did not result in an obesity treatment, they indicated the importance of the brain in regulating weight and formed a platform for further understanding of weight mechanisms in people.

Hoping to understand obesity, brain researchers continued to hunt for molecules that, like leptin, control food intake. What they found was a complex system of chemicals and genes that tightly control appetite and weight.

Researchers soon found that in addition to leptin, a whole host of chemicals signal the brain to trigger hunger or fullness. Many of these hormones act at a brain region in the hypothalamus called the arcuate nucleus. In turn, this region secretes molecules that affect appetite. One type of brain cell in the arcuate produces chemicals that activate the appetite. Another type makes appetite-quashing molecules. Together, the neurons alternately encourage and discourage feeding.

Additional compounds made elsewhere in the hypothalamus, such as orexin, and in the stomach, such as ghrelin, also promote eating. What emerges is a complex system of interacting chemical messengers that regulate weight.

Disturbing this chemical system can have dire effects — brain researchers have found that in rare instances, gene mutations that affect these very chemicals can cause obesity in people. Studies have shown that some people are more prone to weight gain than others due to their genetic makeup. In fact, obesity researchers estimate that 40 to 70 percent of the differences between body types are genetic. The answers now pursued in the lab are not whether a genetic component for obesity exists, but which genes are responsible.

However, so far, geneticists have found only rare gene mutations that contribute to isolated cases of obesity. More sophisticated genetics research will help explain the combination of genetic factors contributing to the vast majority of the obese population.

Thanks to decades of systematic research, scientists now better understand how the brain tightly regulates body weight. Why, then, do obesity rates continue to climb? New research is investigating how complex environments — including the increased availability of highly palatable but nutritionally poor foods in developed countries — affect brain chemistry. The findings indicate the importance of healthy choices in maintaining weight and suggest new avenues of treatment.

Food as an Addiction

Neuroscientists have recently learned that fatty food taps the pleasure centers of the brain, the same areas that are associated with heroin and cocaine habits. For addicted individuals, eating becomes compulsive, regardless of negative health or societal consequences.

Research shows that after extended periods of excessive eating, brain connections are permanently altered on a molecular level. In rats fed a high-fat, high-calorie diet, the brain pleasure centers become less responsive over time, just as they do following drug use. Moreover, when the rats were offered healthy food after weeks of junk food, they were less likely to eat it than rats fed healthy food only. These findings suggest the difficulty in changing established eating habits and highlight the importance of obesity prevention.

With more than 78 million obese people in the United States, the need for weight-control treatments is acute. Therapeutic solutions that target the behavioral, chemical, and genetic components of the disease are all in development. For example, an appetite-reducing drug now in clinical trials activates natural hunger-dampening chemicals and at the same time blocks hunger-stimulating ones. Another treatment is intended to prevent brain cells from responding to noradrenaline and serotonin, brain chemicals linked to addiction.

Because obesity is a complex condition affected by genes, chemicals, behavior, and the environment, explaining it will likely require a comprehensive approach. The coordination and funding of this research, by institutions such as the U. S. National Institutes of Health and Food and Drug Administration, will be vital to stem the epidemic. So too will be research on healthy habits that can encourage wellness, especially in the young.