No disorder captures the attention of the nation like Autism. David G. Amaral, Ph.D., University of California Davis Health System, explains what exactly Autism is, and where the most promising research on the subject is currently located. 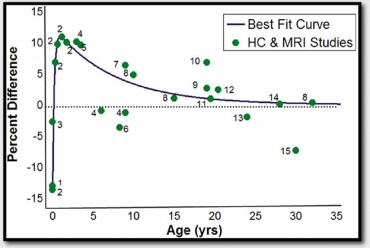 Figure 1: From Redcay and Courchesne, When Is the Brain Enlarged in Autism? A Meta-Analysis of All Brain Size Reports, Biological Psychiatry, 2005;58:1–9

Whether it is a young boy with autism on a news magazine cover, or Claire Danes collecting an Oscar for her portrayal of Temple Grandin, the animal science professor whose writings about her life provide rare insights into the autistic mind, or the debate in the U.S. Congress about special research funding, autism appears to have our full attention. Thanks to brave parents, their foundations, and more recently the NIH, the investments in autism research have helped define the spectrum of developmental disorders that constitute autism.

The numbers of children diagnosed with autism have increased dramatically, from less than 1 in 2000 people in the 1980’s to around 1 out of 110 children in the United States today. No one is sure to what extent this increase is due to better awareness and diagnostics or a substantive rise in the disorder, but many observers consider autism a national health emergency.

A Short Primer on the Basics of Autism

Autism spectrum disorders cross all racial, ethnic and socioeconomic levels and all national boundaries. The essential criteria for diagnosis include age under 3 years, impairments of social interaction, difficulties with verbal and nonverbal communication, and repetitive or highly focused behaviors. Autism is four times more common in boys than girls, and is sometimes accompanied by severe developmental delays. Individuals with autism commonly have one or more additional—called “co-morbid”—problems including epilepsy, anxiety, and gastrointestinal distress, and food allergies. The range of severity of the core symptoms of autism and with these other problems has led to the term “autism spectrum disorders”, but as the terminology is currently undergoing revision, I will use the term autism as shorthand for all forms of autism spectrum disorders I write about here.

The Story So Far in the Genetics of Autism: Things are Complicated

Several decades of twin and family studies show that genes make a substantial contribution to the causes of autism. In monozygotic twins, who have identical genetic makeup, if one twin is diagnosed with autism, in about 60 percent of the cases the other twin will also be autistic. In dizygotic twins, who share half of their genetic makeup, the probability that both siblings will have autism is closer to 10 to 20 percent—about the same risk for a child who has an older sibling with autism. These findings indicate that genetic susceptibility is one important factor in determining who will be afflicted with autism. But what genetic changes lead to autism?  The story is not simple. More than 100 genetic differences have now been ascribed as increasing risk for autism, but none account for more than 1–2% of the cases – a marked contrast to Huntington’s Disease or even Rett syndrome where a single gene defect may lead to the disorder. In families with only one autistic child, small structural alterations in the child’s DNA result in an abnormal number of copies of the sections of one or more genes, so-called “copy number variations,” or CNVs, that may not occur in the mother or father. Analysis of CNVs is fast becoming an integral part of an autism diagnosis.

Many of the genes associated with autism contribute to signal processing at the synapse, the specialized junction where neurons communicate chemically. Understanding exactly how synaptic transmission is altered in autism could spark the development of new drug therapies. For example, in fragile X syndrome—the most common genetic form of mental retardation—about 30% of diagnosed individuals also have autism. The fragile X gene encodes a protein (Fragile X Mental Retardation Protein - FMRP) that helps regulate one form of synaptic transmission. By understanding how FMRP acts at the synapse, new drugs have corrected the brain and behavior problems in animal models of fragile X, and are now in human clinical trials.

The bottom line from the current genetics of autism is that it is very complex. It is now clear that there will not be an “autism gene” or even a small number of genes that consistently cause autism. So, despite the fact that autism appears to be highly genetic, the mechanisms through which genetic risk translates to cause is an area of active research.

Unusual Brain Growth is an Important Correlate of Autism

While the behavior of children with autism is often dramatically impaired, it is ironic that, at first blush, their brains look remarkably normal. They have no hallmark pathology like the plaques and tangles of Alzheimer’s disease nor does any single transmitter system seem to be markedly impaired, as happens with the dopamine pathology of Parkinson’s disease. In this respect, autism resembles other psychiatric disorders, such as schizophrenia, where the neuropathology underlying the disorder is subtle. While the lack of adequate postmortem brain material has hobbled efforts to understand the cellular pathology of autism, increasingly sophisticated magnetic resonance imaging studies of greater numbers of younger and younger children with autism are making headway in defining abnormal trajectories of brain development in autism. An important view has emerged that altered rates of brain maturation, rather than the brain’s condition at any one point in time, are most characteristic of autism.

This figure presents the results of several studies of head circumference (HC) and magnetic resonance image (MRI) measurements of total brain volume in individuals with autism at different ages. The dotted line at “0” represents normal development and green circles represent the percent difference from normal development observed in different studies. Overall, autistic children, in general, have a 6 to10% greater brain volume around age 2-3 which then decreases as the subjects age.

Many children with autism have large heads (macrocephaly), and magnetic resonance imaging (MRI) studies during the last 10 years have confirmed that the brains (particularly the frontal and temporal lobes) of some children with autism are also larger than children their age without autism. Around 6 months of age, the growth of the autistic brain appears to accelerate beyond the non-autistic children by as much as 6 to10% by age 2-3 (Figure 1).  While not all parts of the autistic brain undergo this precocious growth, one area that consistently does is the amygdala, an almond shaped nucleus deep within the temporal cortex that detects danger in the environment.  Individuals with autism exhibit an adult sized amygdala much earlier than non-autistic children. These differences in brain volume tend to disappear as the children get older (either by non-autistic counterparts catching up, or individuals with autism undergoing an increased rate of normal regressive processes at their age  - cell loss and connectional pruning). The fate of the brain in the aging adult with autism needs much more investigation.

Because some parts of the autistic brain grow too fast, the connections between normally developing and rapidly developing brain regions may not be formed properly. Many autism researchers believe that there is an imbalance between the grey and white matter (the long distance connections) of the brain. Sophisticated analyses of the brain networks responsible for social behavior or language show that their activity is less coordinated than in the non-autistic brain.

An obvious question is: What leads to the increased size of the brain or of the amygdala in autism? We don’t know because young autistic brains have not been studied. Ironically, postmortem analysis of older autistic brains find fewer neurons than expected in the amygdala and temporal lobe, while some brains demonstrate patterns characteristic of brain inflammation, suggesting activation of the brain’s special immune cells, called microglia. These findings probably represent only the tip of the iceberg of the neuropathology of autism and only the analysis of a greater number of brains throughout the lifespan of individuals with autism will solve the riddle.

There are currently no pharmacological treatments for the core symptoms of autism. The U.S. Food and Drug Administration has approved the antipsychotic drug Risperdal as a treatment for irritability in autistic children and adolescents, but the most successful current interventions for the core symptoms of autism are behavioral therapies (Applied Behavior Analysis). These interventions, which are commonly provided to children for 20-40 hours per week by trained practitioners, have unequivocally shown benefit in a substantial percentage of children with autism, and the earlier they are implemented the better.  Unfortunately, neuroscientific understanding of the effectiveness of these therapies remains scant. Meanwhile, because drugs are considered medical interventions and behavior therapy is considered psychological or educational therapy, parents are battling medical insurance providers who resist covering the cost of prescribed behavioral therapies even though they are the most effective current treatment.

While progress in understanding the causes of autism has been substantial, many mysteries remain.  Why do so many different genes increase risk for autism? Why do the implicated genes link to autism in some individuals and schizophrenia in others? Why is autism so much more common in boys than in girls? Are there environmental causes of autism that are independent of genetic risk? Why are autistic features so commonly associated with syndromes of intellectual disability? Is it perhaps that autism is a disorder of the most complex cognitive functions of the human brain and any genetic or environmental factor that diminishes cognitive capacity often leads to the symptoms of autism?

We are poised to begin answering these questions. The field of autism research has matured dramatically over the last decade with increasingly sophisticated scientists entering the quest for information with increasingly sophisticated tools. The community of families with autism and individuals with autism have become willing and enthusiastic partners in efforts to understand the causes of autism and finding ways to decrease disability. Working with affected individuals, we also understand now, better than at any time before, that autism can bring benefits along with disabilities. Acceptance, rather than treatment, may be the wiser course of action in some cases. The research holds the prospect of providing not only relief to individuals and families with a serious neurodevelopmental disability, but also insight into the brain organization and functions that distinguish humans from all other species.