Multiple sclerosis, or MS, is a chronic, incurable, and often crippling autoimmune disease. Usually striking in early adulthood, MS begins with relatively mild symptoms, such as tingling or numbness, blurred vision, and fatigue. Symptoms can come and go, but in many people, it eventually destroys the ability to walk, talk, or even see. 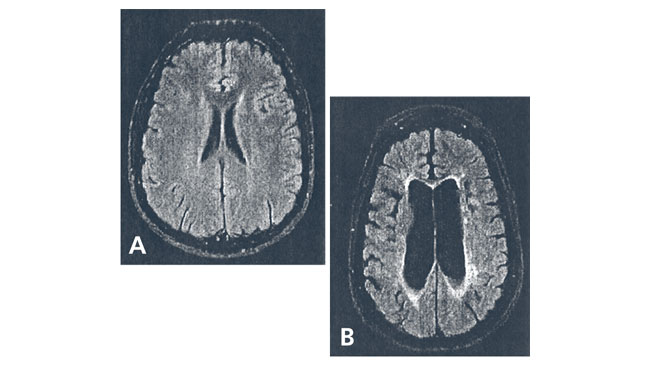 Multiple sclerosis occurs when the body’s immune system mistakenly destroys the myelin covering around nerves. Such damage can be seen in brain scans, which are now increasingly being used to help diagnose the disease and track its progress. For instance, significant tissue loss (represented by dark areas) is apparent in the brain of a 43-year-old woman (B) who has had multiple sclerosis for 19 years, compared to the brain of a healthy 31-year-old man (A).

Multiple sclerosis, or MS, is a chronic, incurable, and often crippling autoimmune disease. Usually striking in early adulthood, MS begins with relatively mild symptoms, such as tingling or numbness, blurred vision, and fatigue. Symptoms can come and go, but in many people, it eventually destroys the ability to walk, talk, or even see.

—About 400,000 Americans have MS, and every week, 200 people are newly diagnosed. Worldwide, MS affects around 2.5 million people.

—Most are diagnosed between the ages of 20 and 50.

—MS is two to three times more common in women than in men.

—MS is estimated to cost the United States $28 billion annually in medical costs and lost productivity.

Fortunately, scientists funded by the National Institutes of Health and other global research agencies are investigating new methods to slow or stop the progression of this disease.

Like type I diabetes or lupus, MS occurs when the immune system turns against the body for unknown reasons. In MS, the target is myelin, a protein that covers axons, long extensions that connect nerve cells to their neighbors. Myelin acts much like the coverings on electrical wires, allowing nerve impulses to speed down an axon. Without myelin, which in MS is replaced by hardened patches of tissue called plaques, electrical signals travel slowly and can stop entirely.

Because MS can strike almost any part of the nervous system, symptoms are highly variable. As the disease progresses, those signs may stay relatively constant, get progressively worse, or appear in short episodic bursts. Most people with MS have normal life spans, but many become severely disabled, with about a third losing the ability to walk.

Because its initial symptoms can resemble those of many other diseases, MS can be difficult to diagnose. However, in recent years, neuroscientists have developed sophisticated methods to help confirm a diagnosis, including brain imaging to check for demyelination, spinal fluid tests to detect inflammation, and electrical tests to find changes in nerve transmission speed. Neuroimaging also can help track the disease’s progression and predict the onset of attacks.

Treatment revolves around minimizing symptoms, preventing new attacks, and reducing disability. For instance, during an attack, doctors have long administered steroids to help reduce the severity of symptoms.

More recently, five “disease modifying drugs” have become available: interferon beta- 1a, interferon beta-1b, glatiramer acetate, mitoxantrone, and natalizumab. These drugs either reduce overall immune system activity or lessen inflammation, not only reducing symptom severity but also the number of relapses. However, all can cause serious side effects, including liver disease and cancer.

Brain researchers also have developed neurorehabilitation techniques for MS. Making use of the brain’s inherent ability to form new circuits, these treatments rely on therapy and training to help people manage or overcome symptoms not treated by medication.