Despite recent advances in spinal cord injury treatment, the condition has no cure and most people show small improvements at best. 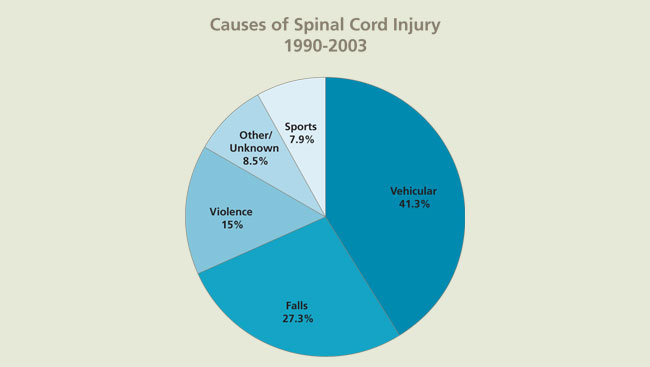 Of the approximately 12,000 spinal cord injuries that occur in the United States each year, the vast majority are caused by trauma to the back or neck. Motor vehicle accidents, falls, and violent acts such as gunshots are the most common causes.

Research Brings Hope for the Future

Many also remain vulnerable to skin lesions, bone and muscle degeneration, and organ failure due to their limited mobility. Brain researchers funded by the National Institutes of Health and other funding agencies, however, are working on ways to regrow nerve connections lost in spinal cord injury, raising the hope of a partial or complete cure for the condition.

Neuroscientists have long known that only a few spinal axons — the long, thin extensions that connect nerve cells together — are needed to help a person recover most movement and sensation. Regrowing 10 percent of axons is enough for a person to regain most abilities, including walking. Researchers are working on a variety of treatment options that prevent or repair axon damage, including many that are already or soon will be available for human clinical tests.

One promising area of research explores better ways to prevent apoptosis — a process of cell suicide — following a spinal cord injury. Scientists are testing several neuroprotective chemicals that might shield nerve cells from such death. Other work looks at minimizing the number of immune cells that arrive to "clean up" the site of a spinal injury and release large amounts of antibodies, which may actually make damaged tissue worse.

Other scientists are considering ways to spur damaged nerve cells to regrow or repair their axons. Evidence suggests that the body switches off this regrowth process by releasing inhibitor chemicals, and scientists are exploring how to negate or remove those neuroinhibitors. Researchers also are investigating whether a "vaccine" against certain chemicals may coax immune cells to spur axon regrowth.

Other therapies implant new cells — including stem cells — into the injury site to provide new connections, often using tiny devices to guide new growth, although progress is still early. Electrical stimulation has shown some promise in promoting axon regrowth and cell regeneration. Neuroscientists also are investigating ways of returning spinal neurons to an earlier stage of development, when they possess a greater ability to form new axons.

New therapeutic options would take advantage of neuroplasticity, the ability of nerve cells to make new connections as needed, as well. In addition to treadmill therapy, scientists have found that other intense physical therapies can create functional new movement circuits. These therapies may be particularly effective when combined with electric prostheses that directly stimulate such circuits when needed.

The loss of neurons is a hallmark of many neurological conditions, including Alzheimer’s disease, Parkinson’s disease, multiple sclerosis, and others. Continued funding for spinal cord injury could provide insights into and new treatments for many crippling brain disorders. But perhaps the greatest benefits would apply to stroke, another condition in which an initial loss of nerve cells leads to the loss of essential brain circuits and functions.