Although scientists have made great strides in understanding Alzheimer’s disease, no treatment has been approved for halting or reversing the condition. Meanwhile, the need is becoming more urgent, as populations in the world’s developed nations grow older and live longer. 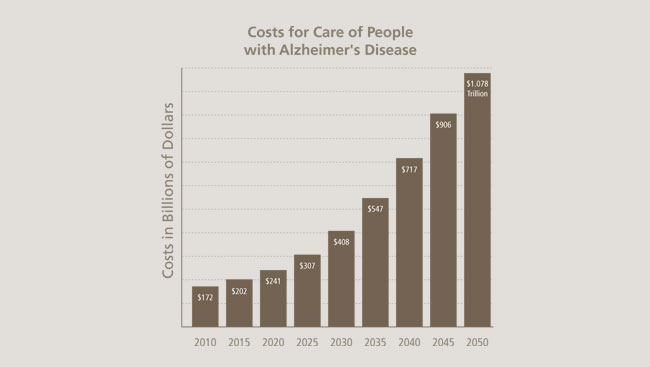 Alzheimer’s disease is one of the most expensive diseases facing the developed world, especially as populations age and the number of people with the condition grows. Between now and 2050, the total costs of care for Americans age 65 and older with Alzheimer’s disease is expected to increase fivefold, from $172 billion to $1.08 trillion each year.

The percentage of people dying because of Alzheimer’s disease is accelerating as rates for many other conditions, such as stroke, heart disease, and breast cancer, fall. Fortunately, neuroscientists supported by the National Institutes of Health, other funding agencies, and private companies continue to develop a greater understanding of the root causes of Alzheimer’s disease and test new treatments.

Alzheimer’s disease has a robust drug development program, and neuroscientists are optimistic about the prospects for new treatments. Many compounds are in clinical testing, including more than 50 intended to slow down the progression of the disease. Several are in Phase III trials, the final phase before possible government approval for general use.

Developing new treatments for Alzheimer’s has proven challenging, however, as scientists still need to know more about how the brain functions and goes awry. High-profile tests of statins, used to treat high cholesterol, and an antihistamine known as dimebon recently failed to show significant benefits against Alzheimer’s. In addition, vaccinations and antibodies that target the amyloid beta protein clumps believed to cause or exacerbate Alzheimer’s disease showed limited benefit in early studies. However, larger advanced clinical trials are ongoing and show promising results.

Neuroscientists are investigating more powerful methods for treating its symptoms. Experimental medicines that enhance memory could stave off many signs of Alzheimer’s.

Other brain scientists are working on better ways to diagnose Alzheimer’s disease in its earliest stages, years and possibly even decades before symptoms first appear. These include brain scan techniques that can track amyloid beta or detect changes in brain function, size, or blood use. Spinal tests that detect abnormal amounts of amyloid and tau proteins could help track disease progression in those with mild cognitive impairment or Alzheimer’s disease, and may allow doctors to predict which people are likely to develop these conditions.

Neuroscientists hope to couple these diagnostic techniques with better preventative measures. Some researchers are working on vaccines and antibodies to stave off Alzheimer’s. Studies also continue on the kinds of exercises, mental activities, diets, and lifestyle choices that seem to minimize the risk of developing Alzheimer’s disease, cause it to appear later in life, or reduce the severity and progression of symptoms.

Alzheimer’s disease is not the only neurological condition that involves a clumping of proteins believed to be harmful to brain tissue. Parkinson’s disease, Huntington’s disease, and other neurological conditions feature such buildup, although different proteins are involved. Continued funding for Alzheimer’s research could therefore provide insights into other serious brain disorders.