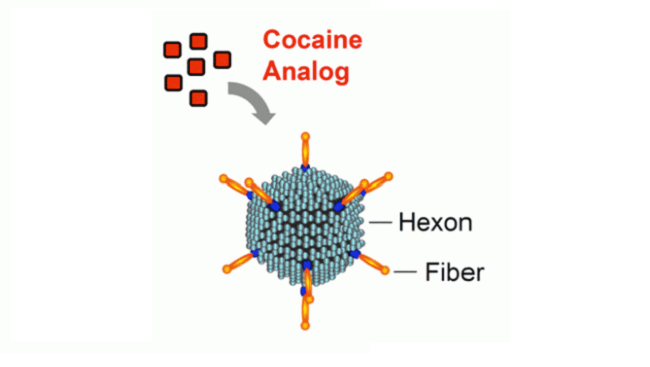 Attracting Attention The anti-cocaine vaccine comprises a cocaine analog—an inactive, cocaine-like molecule—attached to a robust stimulator of the immune system—an adenovirus with hexon and fiber components. The resulting vaccine induces the body to generate a high level of cocaine antibodies, which prevent the drug from entering the brain for several months.
National Institute on Drug Abuse 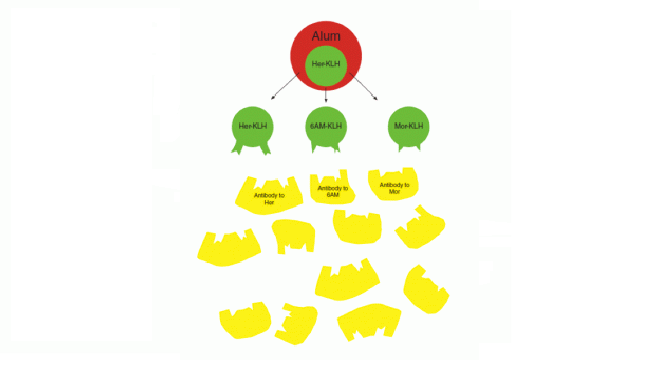 The anti-heroin vaccine comprises an inactive, heroin-like hapten (her) linked to a carrier protein (keyhole limpet hemocyanin, KLH) and an adjuvant (Alum). This dynamic vaccine displays multiple haptenic structures simultaneously, allowing the immune system to generate antibodies to not only heroin but also its psychoactive metabolites 6-acetylmorphine (6AM) and morphine (mor).
National Institute on Drug Abuse

The anti-cocaine vaccine comprises a cocaine analog—an inactive, cocaine-like molecule—attached to a robust stimulator of the immune system—an adenovirus with hexon and fiber components. The resulting vaccine induces the body to generate a high level of cocaine antibodies, which prevent the drug from entering the brain for several months.

Dr. Ronald Crystal of Weill Cornell Medical College and Drs. George Koob and Dr. Kim Janda of the Scripps Research Institute are among the numerous scientists who are striving to create vaccines that can protect against nicotine, cocaine, methamphetamine, and opiates. In 2009, NIDA-supported researchers at Baylor College of Medicine reported partial success in the first clinical trial of an anti-cocaine vaccine:  Some recipients generated strong antibody responses and reduced their cocaine intake, but others did not (See "Cocaine Vaccine Helps Some Reduce Drug Abuse"). Those results affirmed that antidrug vaccines can protect against drugs’ psychoactive and behavioral effects and invigorated the search for other and improved formulations.

The goal of an anti-drug vaccine is to induce the immune system to block the psychoactive effects of its target drug. When an anti-drug antibody encounters a molecule of the drug, the two combine to form a complex that is too large to pass from the bloodstream into the brain. Locked out of the brain, the drug cannot produce the rewarding effects that motivate continued use.

Both the group including Drs. Crystal and Koob and the one led by Dr. Janda employed the same two-component strategy to construct their vaccines. The first component is a carrier protein, selected to be highly immunogenic: Its function is to stimulate the immune system to produce enough antibodies to intercept the millions of molecules in a dose of the target drug before they reach the brain. The second component, called a hapten, is a molecule that shares some key structural features with the target drug: It provides the immune system with a template for the formation of antibodies that recognize and attach to the target drug.

The efficacy of vaccines of this type depends on the precise selection and configuration of the carrier protein and hapten. Because of the complexity and intricacy of immune responses, the search for an ideal combination is largely a process of trial and refinement.

Cocaine and the Common Cold

Dr. Crystal and colleagues employed a carrier protein whose potent immunogenicity is all too familiar: an adenovirus, agent of the common cold. The researchers disabled a protein (the adenovirus 5 gene transfer vector) from the virus’ infectious apparatus and linked it to a hapten termed GNE, an amide-cocaine-memetic that was designed and synthesized by Dr. Janda’s group at Scripps. This combination, given in an initial vaccination followed by booster injections after 3 and 5 weeks, produced high blood concentrations (500,000 to 1,000,000 titer units) of anti-cocaine antibodies that persisted for 3 months in rats. To determine whether the vaccine prevented cocaine from moving from the blood into the brain, the researchers administered radiolabeled drug to vaccinated and control rats. Assays found that 2 minutes after the administration, vaccinated animals had 3.5 times as much drug in their blood as compared to control animals, and 66 percent less in brain tissue.

With less cocaine reaching their brain, vaccinated rats exhibited weakened behavioral responses to the drug. Although they displayed typical reactions of hyperactivity and increased locomotor activity following a series of cocaine injections, they did so only 20 percent as intensely as control animals. Similarly, vaccinated rats retained motivation to press a lever to self-administer cocaine intravenously, but they did not work as hard for the drug as control animals: In a progressive ratio protocol, which multiplies the number of presses required for delivery of each successive infusion, vaccinated rats quit at a cost, or ratio, of 12 presses per injection, whereas controls would keep pressing up to 32 presses per injection.

Another experiment had direct application to the vaccine’s primary proposed clinical use: to shield abstinent individuals who lapse from experiencing cocaine effects that can precipitate extended relapses. The researchers gave a small priming dose of cocaine to rats that had previously established steady cocaine self-administration but had stopped seeking the drug during a period of extinction. The new exposure to the drug prompted the control rats, but not the vaccinated rats, to return to drug-seeking—pressing the lever that had initially yielded cocaine, but no longer did so.

In designing their heroin vaccine, Dr. Janda and colleagues noted that antibodies to heroin alone would still permit production of the drug’s psychoactive metabolites. They therefore varied the basic vaccine strategy to employ what they call a dynamic vaccine. A single hapten coupled to a carrier protein slowly morphed itself into multiple haptens paralleling heroin’s degradation pathway, thus allowing the immune system to sample and make antibodies to not only heroin but its important metabolites, such as 6-acetylmorphine (6AM) (see "Building Effective Vaccines" below). The Scripps team achieved its results by binding haptens to a commonly used carrier protein, keyhole limpet hemocyanin, and the adjuvant alum, a chemical salt that restricts enzymatic access. With reduced exposure to enzymes, breakdown of the haptens occurs more slowly, affording the immune system more opportunity to detect the resulting metabolites and form antibodies to them.

To test how successfully the vaccine blocked the drug from entering the brain, initially the researchers, in collaboration with the Koob group, assessed its impact on heroin analgesia. This test can be used as a first screen because if the drug does not reach the brain, it will lose its analgesic as well as its rewarding effects.

The researchers injected rats with heroin and placed them on a plate that was hot enough to cause mild pain, but not injury. Control rats took 30 seconds to lift their paws off the plate. Vaccinated rats evinced sufficient discomfort to do so after just 10 seconds, no different from the response of animals not treated with heroin. Most remarkable was the vaccine’s specificity for heroin: In parallel experiments, it did not attenuate the analgesic effects of the closely related and commonly prescribed drug Oxycodone.

Vaccinated rats also demonstrated less inclination than controls to self-administer heroin intravenously. Over 10 sessions in which animals had access to a lever that delivered infusions of the drug, all seven control animals pressed the lever three or more times during any of three consecutive sessions, whereas only three of the seven vaccinated rats did so.

Adding to the Treatment Arsenal

It is always challenging to transfer new vaccine technology to people, says Dr. Crystal. “Our team will need to demonstrate that, from patient to patient, the cocaine vaccine consistently induces a high level of antibodies with strong affinity to cocaine for a long duration,” he says. “The only way to do that is to conduct a clinical trial.”

If the technology needs tweaking, Dr. Koob adds, “there are ways to make vaccines more compatible with humans, for example, using carriers other than the adenovirus.”

Drs. Crystal and Janda agree that vaccine treatments for addiction should be part of a comprehensive therapy. “People have the misconception that a single vaccine can protect patients from substance abuse—that’s not true,” says Dr. Janda. However, the results suggest that vaccines are a promising adjunct therapy to accompany drug counseling. For example, Dr. Crystal says, “a patient who has attained abstinence could be vaccinated to block the effects of the drug, thereby preventing relapse.”

Dr. Janda notes, “Our vaccine will not alleviate craving, but it could help patients maintain abstinence in weak moments.” He adds that by fighting addiction, a heroin vaccine may help to combat  HIV in countries where injection of the drug contributes to spread of the virus.

“The vaccine approach provides an alternative strategy for treating drug addiction,” says Dr. Nora Chiang of NIDA’s Division of Pharmacotherapies and Medical Consequences of Drug Abuse. “There is much more work to be done on these vaccines, but the results so far are promising.”