Xin Jin had planned to pursue a career in physics, but instead applied his training to seek out the unifying principles of another scientific frontier — neuroscience. Now, as an assistant professor in molecular neurobiology at the Salk Institute, he explores the mechanisms behind learned behavior. In 2011, the Society for Neuroscience selected Jin for the prestigious Gruber International Research Award in Neuroscience, which recognizes promising young scientists who have studied or conducted research in an international setting. 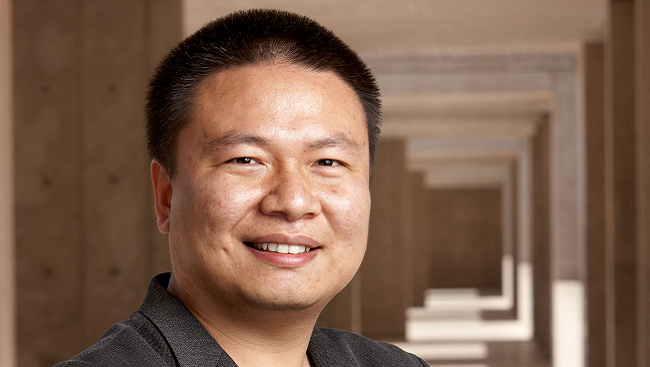 Xin Jin is an assistant professor in molecular neurobiology at the Salk Institute and the winner of the Gruber International Research Award in Neuroscience.

When I was young, I was very interested in physics. I had plans to go to graduate school for physics, but a professor encouraged me to explore biology. At the time, I had never taken any biology courses, but I soon discovered biology to be interesting and stimulating.


How do you think your early training in physics influences your approach to the study of behavior?

There are many interesting observations and details in neuroscience, but unlike physics, very few, if any, principles have been discovered to unify these phenomena. We're still far from understanding the brain and behavior at the system level.

What do you study in your lab?

My research attempts to understand one thing: how we behave. When we commit actions, we move for a purpose. This means that every movement has a goal. My lab tries to understand how these goals shape our behavior.

If something good happens, you’re going to do it more. If something bad happens, you stop. The brain can learn the relationship between the action and the outcome and apply this information to a new situation in which you must pick how to act. You always want to maximize a situation.

How do you study action learning?

My lab employs a vast array of tools to dissect the brain circuits and mechanisms that underlie action learning in mice. We hope to characterize the fundamental principles of how the brain learns and generates actions from multiple levels of analysis, and provide insights into neurological diseases where the ability to start and stop actions is disrupted, such as in Parkinson's and Huntington's diseases.

What can mice teach us about behavior?

We know more and more that mice can do almost anything as long as scientists can figure out how to train them to complete a task. In our lab, we trained mice to press a lever eight times to get a sucrose reward without any explicit cues indicating when the reward is available. So the mice have to decide when to start and when to stop pressing the lever.

We further showed that this start/stop activity is essential for the animals to learn and organize their behavior as precise action sequences. We found that many neurons in the basal ganglia circuits (the same circuits affected by movement disorders such as Parkinson’s and Huntington's diseases) selectively signal the start and stop of action sequences. Such findings could have important implications for people with Parkinson’s disease and other action disorders.

What do you hope are the significance of your findings?

We know that people with Parkinson’s and Huntington’s diseases exhibit severe deficits in the execution of sequential movements. Our research shows that the start/stop activity in the basal ganglia circuits is necessary for the performance of self-initiated action sequences.

We think dysfunction in basal ganglia circuits likely contributes to the symptoms observed in diseases like Parkinson’s and Huntington’s. Future experiments in our lab will try to test if we can eliminate these symptoms by generating the start/stop activity in these dysfunctional circuits. Eventually, the goal is to use these findings to treat people with these or other movement disorders.