A Dose of Music for Pain Relief

If the drone of a dentist’s drill gives you the shivers, you're not alone. Many people avoid the dentist because they fear pain. While there’s little dentists can do to make a root canal palatable, there is evidence that listening to soothing music during the dental procedure can make the experience feel less painful. 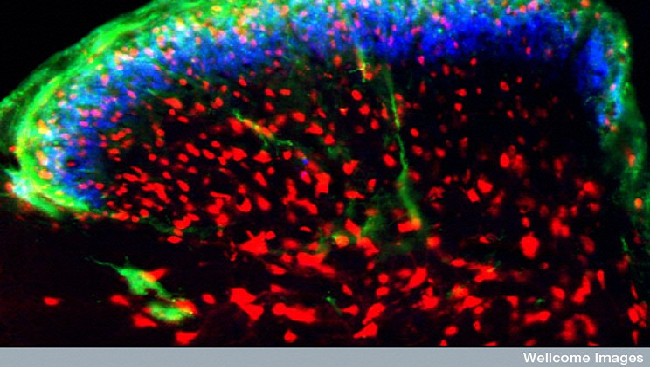 Studies suggest that music can interfere with pain signals even before they reach the brain — at the level of the spinal cord (cross-section pictured above). Cells in red represent all nerve cells while those in green and blue represent pain nerve fibers.
Simon Beggs, Wellcome Trust

To better understand music’s pain-relieving nature, scientists are exploring how the brain processes music during pain.

When the body encounters something painful — you step on a tack, for instance — electrochemical signals travel from the site of the injury to the spinal cord and on to the brain. There, several brain regions work together to process pain signals — ultimately resulting in the conscious experience of, “Ow, that hurts!”

In contrast, brain scans reveal that listening to pleasing music increases activity in parts of the brain's reward center.

“Pleasant music triggers the release of the brain chemical dopamine,” explains Robert Zatorre, of McGill University, who studies emotion and music. This change “is strongly associated with other rewarding and motivating stimuli, such as food, sex, and certain addictive drugs,” Zatorre adds. Scientists believe that music’s ability to make you feel good may be one way it helps to alleviate pain.

Studies also suggest that how good a song makes you feel affects your perception of pain. Although musical taste is subjective, there are common features of music that evoke fairly universal responses. For instance, most people find musical consonance (harmonies or chords) to be pleasant and dissonance (clashing notes) to be unpleasant.

When scientists asked study volunteers to evaluate pain while they listened to different types of music, researchers found that people who listened to excerpts of music judged by most to be pleasant (such as the Romantic music piece "The Blue Danube Waltz") reported less pain than those who listened to unpleasant music (such as Steve Reich's modern classical piece "Pendulum Music"). The more pleasing the listeners found the music to be, the less pain they felt.

Other studies suggest that music can interfere with pain signals even before they reach the brain — at the level of the spinal cord. In these studies, scientists examine how different types of music change the withdrawal reflex: an involuntary organized entirely in the spinal cord.

In one study, scientists measured how forcefully volunteers withdrew their feet after being mildly electrically zapped on an ankle as they listened to music. Compared with pleasant music, unpleasant music resulted in stronger leg reflexes and greater reports of pain.

Psychologist Mathieu Roy, of the University of Colorado, Boulder, who conducted the study, says these results suggest that music can prevent the transmission of pain signals from the spinal cord to the brain.

Another factor in music’s ability to reduce pain likely stems from its competition for our attention.

“If you're thinking about something else, then you're not thinking about your pain, and you feel less pain,” says psychologist David Bradshaw, who studies pain relief at the University of Utah's Pain Research Center.

Bradshaw’s research shows that the more actively engaged a person is in music, the less pain they feel. For instance, a group of non-musicians asked to listen for errors in a musical passage reported less pain when receiving small electric shocks than those who passively listened to the music.

Other work out of Bradshaw’s lab suggests that certain personality factors, such as a propensity toward anxiety or the ability to become easily absorbed in activities, may lead individuals to experience greater relief from engaged music listening. These findings suggest that physicians should consider patients’ personalities when recommending pain treatment programs.

Alleviating Your Pain with Music

The improvement of physical wellbeing through music isn’t only about perceived pain relief. Studies show that playing music for patients before, during, and after medical procedures can help lower blood pressure, reduce anxiety and stress, ease muscle tension, and more.

At the Chronic Pain Care Center at the Rehabilitation Institute of Chicago, music therapy is part of the array of techniques that patients learn to help control their pain, according to osteopathic physician Steven Stanos, medical director of the center. As Stanos sees it, there is no reason not to take time to listen to music.

“What we've learned from our pain patients is that any intervention that can be distracting, relaxing, and enjoyable — whether it's music or another therapy — can decrease the experience of pain,” Stanos says. 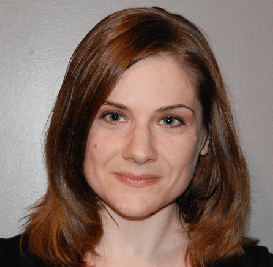