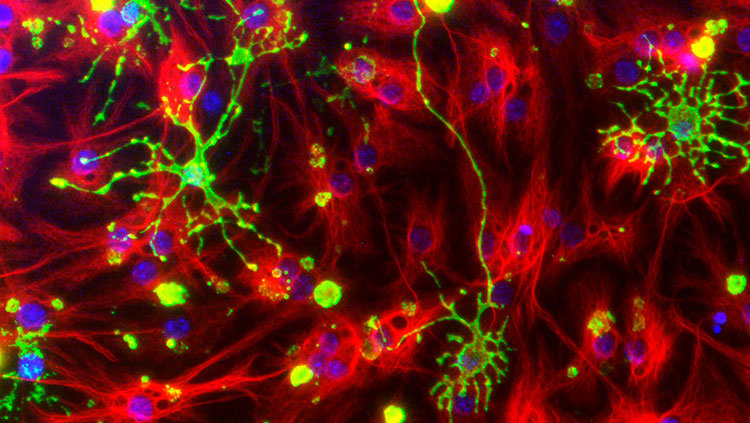 These were the top neuroscience stories for the week of February 3, 2020.

Scientists may be a step closer to figuring out how genes contribute to autism. In a study published February 3 in Nature Neuroscience, scientists found genetic mutations disrupt the cells that insulate neurons and speed electrical signaling in the brain in people with autism and in mouse models of the disorder. The researchers analyzed gene expression in a mouse model of Pitt-Hopkins syndrome, a rare genetic disorder that causes intellectual disability, language problems, and autistic behavior. These mice expressed fewer genes governing the function of oligodendrocytes, cells that coat axons in insulating myelin. The mice also possessed fewer mature oligodendrocytes and myelinated axons in their brains. The researchers found the same pattern of genetic changes and impaired myelination in the postmortem brains of people with autism.

Babies learn language by listening to and imitating their caregivers. Turns out speaking to babies in a certain way can boost their language development. In a study published February 3 in Proceedings of the National Academy of Sciences, researchers found coaching parents on “parentese” — a pattern of speech with a slower tempo, higher pitch, and exaggerated intonations — improved their babies’ language skills at 18 months. (Parentese differs from “baby talk” because it uses real words and proper grammar and pronunciation.) The researchers coached families on parentese and recorded conversations between the parents and their babies. By 18 months, babies whose parents were coached were more talkative and had a bigger vocabulary compared to babies whose parents weren’t coached.

Big picture: Early experiences have a profound effect on brain health and development. Sensory stimulation and positive interactions with caregivers help the brain’s circuits wire up properly, while stress and poverty can hinder this.

The Brain Cells That Help You Forget

When it comes to learning, forgetting is just as important as remembering. Forgetting makes room for new, more important memories. In a study published February 7 in Science, scientists discovered one strategy the brain uses to forget: immune cells gobble up the connections between nerve cells, or synapses. When the researchers depleted immune cells, called microglia, from mice using a toxin, the mice were still capable of learning new things — they learned to fear a cage where they received a mild, unpleasant shock — but they couldn’t forget as easily. Thirty-five days after their first experience with the electrified cage, the mice were more likely to freeze in fear compared to mice with intact microglia.

Big picture: Microglia are the brain’s resident immune cells. For a long time, scientists thought their only jobs were fighting pathogens and cleaning up dead cells. But, in recent years, scientists have learned the cells play an important role in brain development, pruning extra connections between nerve cells, called synapses.

Read more: How Does a Mammalian Brain Forget? (Scientific American)