As scientists unlock more of the neurological secrets of the bilingual brain, they're learning that speaking more than one language may have cognitive benefits that extend from childhood into old age. 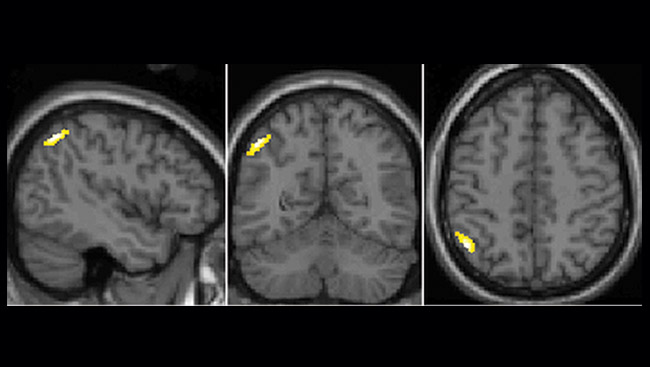 As scientists unlock more of the neurological secrets of the bilingual brain, they're learning that speaking more than one language may have cognitive benefits that extend from childhood into old age.
Mechelli A., et al. Nature. Oct. 14; 431:757 (2004).

Brain scans of bilingual individuals found greater gray-matter density (yellow) in the inferior parietal cortex, an area in the brain’s language-dominant left hemisphere. The density was most pronounced in people who were very proficient in a second language and in those who learned a second language before the age of five.

Parlez vous francais? Sprechen Sie Deutsches? Hablas español? If so, and you also speak English (or any other language), your brain may have developed some distinct advantages over your monolingual peers. New research into the neurobiology of bilingualism has found that being fluent in two languages, particularly from early childhood, not only enhances a person’s ability to concentrate, but might also protect against the onset of dementia and other age-related cognitive decline. These discoveries are leading to:

Bilingualism is common in the United States. According to the U.S. Census Bureau, about 21 percent of Americans speak a language other than English at home. Of those, three-quarters also report that they speak English “well” or “very well” — a strong indication that they are bilingual.

Until fairly recently, parents and educators feared that exposing children to a second language at too early an age might not only delay their language skills but harm their intellectual growth. New research, however, has found that bilingual children reach language milestones (such as first word and first fifty words) at the same age as monolingual children. Nor do they show any evidence of eing “language confused.” Indeed, young infants are able to use rhythmical cues  to keep their two languages distinct, and do so from the first days of life.

In fact, being bilingual may give children an advantage at school. Bilingual preschoolers have been found to be better able than their monolingual peers at focusing on a task while tuning out distractions. A similar enhanced ability to concentrate — a sign of a well-functioning working memory — has been found in bilingual adults, particularly those who became fluent in two languages at an early age. It may be that managing two languages helps the brain sharpen — and retain — its ability to focus while ignoring irrelevant information.

Other research suggests that bilingualism may delay the onset of age-related dementia, including Alzheimer’s disease, by up to four years. Although scientists don’t know why bilingualism creates this “cognitive reserve,” some theorize that speaking two languages may increase blood and oxygen flow to the brain and keep nerve connections healthy—factors thought to help ward off dementia.

More recently, scientists have discovered that bilingual adults have denser gray matter (brain tissue packed with information-processing nerve cells and fibers), especially in the brain’s left hemisphere, where most language and communication skills are controlled. The effect is strongest in people who learned a second language before the age of five and in those who are most proficient at their second language. This finding suggests that being bilingual from an early age significantly alters the brain’s structure.

Exactly how the brain organizes language in bilingual individuals has been debated for many years. Is each language “stored” in its own area of the brain or in overlapping regions? Thanks to technological advances in brain imaging, scientists have recently discovered that the processing of different languages occurs in much of the same brain tissue. However, when bilinguals are rapidly toggling back and forth between their two languages — that is, in “bilingual mode” — they show significantly more activity in the right hemisphere than monolingual speakers, particularly in a frontal area called the dorso-lateral prefrontal cortex (the source of the bilingual advantages in attention and control). This expanded neural activity is so prominent and predictable on brain scans that it serves as a “neurological signature” for bilingualism.

Finally, neuroscience research is showing promise for evaluating and treating bilingual patients who lose the ability to produce or understand speech after a brain injury. Research is showing that rehabilitation efforts that use both languages, not just one — even a patient’s native language — hold the greatest promise for recovery.

Petitto LA, Kovelman I. The bilingual paradox: how signing-speaking bilingual children help us resolve it and teach us about the brain’s mechanisms underlying all language acquisition. Learning Language. 8:5-18 (2003).

Werker J.  Perceptual Foundations of Bilingual Acquisition in Infancy. Annals of the New York Academy of Sciences: The Year in Cognitive Neuroscience. 1251, 50-61 (2012).