In depression, one of the most common and costly brain diseases, people feel intensely and persistently sad, experience no pleasure, and lose interest in the things around them. 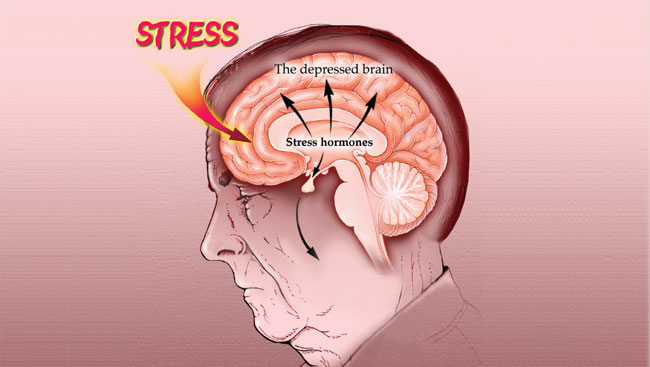 Under repeated stress, an individual’s stress hormones are continuously activated, keeping the person in a constant state of wariness. Malfunctions in this stress system can result in chronic depression. But brain researchers are currently looking at ways to prevent or even reverse such disruptions.
Illustration by Lydia Kibiuk. Adapted from Brain Briefings, published by the Society for Neuroscience.

Under repeated stress, an individual’s stress hormones are continuously activated, keeping the person in a constant state of wariness. Malfunctions in this stress system can result in chronic depression. But brain researchers are currently looking at ways to prevent or even reverse such disruptions.

As a result, they have difficulty concentrating, trouble staying asleep, and a lack of appetite. They may think of committing suicide. The potential results: ruined health, devastated personal relationships, lost jobs — even death.

Fortunately, neuroscientists supported by the National Institutes of Health and other funding agencies around the world are developing new, more powerful treatment options to help prevent depression or minimize its effects.

People suffering from depression now have multiple treatment options that can help reduce symptoms and prevent the likelihood of relapse. Researchers have found, for instance, that psychotherapy, or "talk therapy," can often treat depression on its own, especially in mild to moderate cases. Cognitive behavioral therapy, which focuses on identifying and changing negative ways of thinking, has shown particularly strong results. Exercise and stress management also can help improve mood.

In many cases, however, antidepressant medications, either alone or alongside therapy, are needed. The past decade has seen the development of sophisticated medications that target serotonin and norepinephrine, molecules that facilitate communication between brain cells. One popular class of drugs are the selective serotonin reuptake inhibitors, which include fluoxetine (Prozac) and sertraline (Zoloft). Serotonin and norepinephrine reuptake inhibitors, such as venlafaxine (Effexor) and duloxetine (Cymbalta), also are widely used.

Medications can have serious side effects and may need several weeks to take effect. They also can be idiosyncratic. Many people who struggle with one drug may find relief after switching to something else or by taking a combination of drugs. In some cases, older classes of antidepressants, such as tricyclics and monoamine oxidase inhibitors may be the best choices. Currently, finding the right treatment is largely trial and error.