Neurotransmitters: How Brain Cells Use Chemicals to Communicate

Whether it is learning a new fact or deciding which way to move, tasks executed by our brains rely on the smooth and efficient release of neurotransmitters, chemicals that send messages from one brain cell to another. Research has unlocked the molecular and cellular mysteries of this complex process — discoveries that one day may help treat some of the most severe and deadly diseases of the brain. 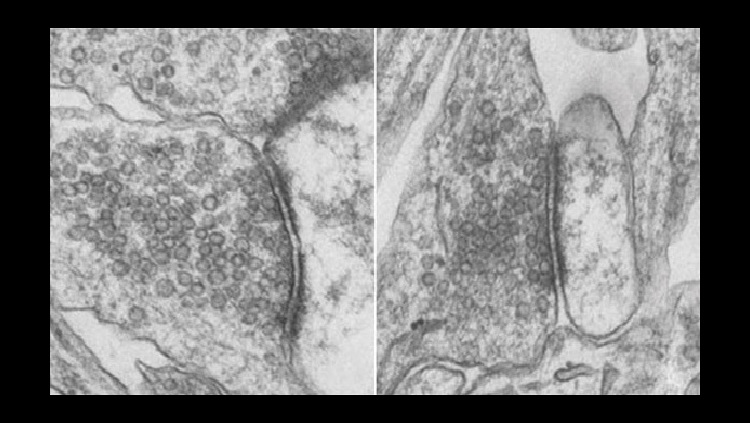 Brain chemicals, called neurotransmitters, are packaged in tiny, bubble-like compartments known as vesicles. The images show vesicles at the end of one brain cell that are ready to cross a small gap into another brain cell. Every millisecond of every day, a remarkable string of events occurs in the brain: billions of brain cells called neurons transmit signals to each other. And they do it at trillions of junctions called synapses. It is an extremely fast and efficient process — one central to everything the brain does, including learning, memorizing, planning, reasoning, and enabling movement.

When even one part of the process breaks down, the results can be devastating. Many brain disorders and nervous system diseases, including autism, schizophrenia, Alzheimer’s disease, epilepsy, and even botulinum poisoning, have been linked to problems at the synapse. Thanks to advances in molecular cell biology, neuroscientists have pieced together many of the step-by-step details going on at synapses. They discovered different molecules play special roles to make sure neurotransmitters — the chemicals that carry the messages from one neuron to another — are released. This exciting research is leading to:

Each synapse consists of the ends of two neurons separated by a tiny gap (so tiny, it is measured in nanometers, or billionths of a meter). When new information is received by the first neuron, it creates an electrical impulse that triggers the release of neurotransmitters. The neurotransmitters then move across the gap to the second neuron, where they bind to special molecules called receptors — one for each kind of neurotransmitter. All this happens with incredible precision and is repeated again and again as the signal is passed at split-second speed from neuron to neuron.

How the neuron releases neurotransmitters has been the focus of considerable research. Scientists discovered neurotransmitters are stored in small, bubble-like compartments called vesicles. Each vesicle tends to hold a single kind of neurotransmitter — say, dopamine, which is associated with memory and other cognitive skills, or serotonin, which helps regulate mood. The vesicles travel like tiny ferryboats to the end of the neuron, where they dock, waiting to be released. When it is time for the neuron to release neurotransmitters, the vesicles fuse with the membrane of the neuron and dump their contents into the synapse gap.

The delicate fusion process — described as the merging of two soap bubbles into one — is highly complex and involves the work of many different and specialized molecules within the neuron. After neurotransmitter release, the neuron recycles the empty vesicles, refilling and reusing them several more times before they need to be replaced. If any part of this process goes awry — if a molecule fails to do its job properly or if the vesicles release their neurotransmitters at the wrong speed — serious problems may develop. Scientists have discovered, for example, that botulinum, bacterial toxins that cause the often-fatal form of food poisoning known as botulism, attack proteins important in neurotransmitter release. Botulinum cuts these proteins in two and prevents them from helping vesicles release their neurotransmitters, leading to paralysis. However, physicians now use botulinum to intentionally paralyze muscles to alleviate painful muscle spasms caused by the neurological disorder dystonia.

Neurotransmitter release problems may also contribute to certain psychiatric disorders. For example, mice genetically engineered to lack a particular synapse-related protein — one also scarce in the brains of people with schizophrenia — require more time to release their neurotransmitters. By identifying such breakdowns in neurotransmitter release, scientists hope to develop treatments that may one day reverse the symptoms of these and other devastating brain disorders.

Because of the implications for understanding brain function and health, synapse function is an area of intense and active research. New tools and technologies in physics, biochemistry, and molecular and cellular biology made it possible to study this activity for the first time. Ongoing research on neurotransmitter release continues to unlock the mysteries of brain health and disease.