Schizophrenia is a chronic mental disorder that causes people to lose touch with reality. People with the condition may hear voices that aren’t there or think others are out to hurt them. 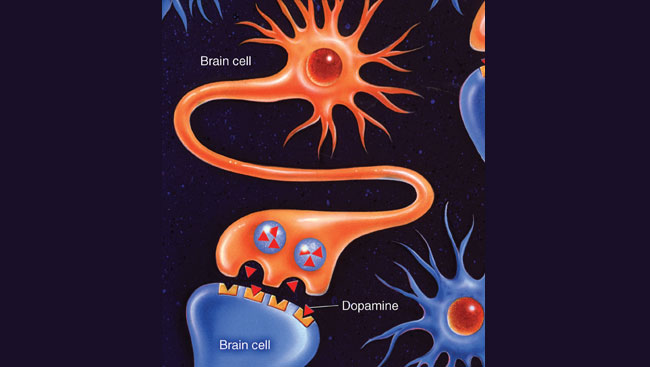 Brain scientists have developed medications that can help minimize or eliminate the psychotic symptoms of schizophrenia. These drugs mostly block receptors to the neurotransmitter dopamine, reducing activity in the "dopamine" pathways of the brain.
Illustration by Lydia Kibiuk. Adapted from Brain Facts, published by the Society for Neuroscience

Brain scientists have developed medications that can help minimize or eliminate the psychotic symptoms of schizophrenia. These drugs mostly block receptors to the neurotransmitter dopamine, reducing activity in the "dopamine" pathways of the brain.

Among its most devastating aspects is its timing; schizophrenia strikes in the prime of life, wreaking havoc just when most people are starting careers and families.

Fortunately, scientists funded by the National Institutes of Health and other global research organizations have made great strides in understanding the disorder and finding ways to minimize its harmful effects.

Mental health professionals typically break the symptoms of schizophrenia into three groups. Positive symptoms — psychotic behaviors that don’t occur in healthy people — include hallucinations, delusions, and disordered thinking. Negative symptoms or disruptions to normal emotions and behavior, include flat affect, a withdrawal from social activities, and a lack of pleasure in everyday events. Cognitive symptoms include problems with attention, memory, and decision-making.

Because there is no laboratory test for the condition, diagnosis usually involves interviews with patients and their family members. This can be difficult, however, because the symptoms of schizophrenia overlap with other mental disorders.

While schizophrenia has no cure, its positive symptoms can be treated successfully using antipsychotic medications, which tend to block the brain’s receptors of the neurotransmitter dopamine. Drugs first developed in the 1950s are known as "typical" antipsychotics. A new generation of antipsychotic medications, known as "atypical" antipsychotics, was discovered in the 1990s. Although many doctors prefer the newer drugs, whether they are more effective than their older counterparts remains unclear and researchers continue to explore this issue.

As in other mental disorders, these drugs take weeks to show their full effect, can have serious side effects, and can affect people differently. Basic science researchers are investigating how these drugs work in an effort to create improved medications.

Typically, drug treatment works best when combined with therapy and education. Talk therapy can teach people how to manage their symptoms and develop coping mechanisms. Often, a psychotherapy known as cognitive behavioral therapy, which focuses on thinking and behavior, helps people identify and ignore their delusions and hallucinations.

Other treatments include counseling for substance abuse, which occurs in about 40 percent of schizophrenia patients. Job training can help people who were too sick to develop a career, while self-help groups and family education sessions can improve quality of life for patients and their families.