Although antipsychotic drugs and improved therapeutic techniques represent great advances in the treatment of schizophrenia, they do not help everyone. Even when successful, they typically mitigate only psychotic effects, leaving many patients severely disabled from their negative and cognitive symptoms. 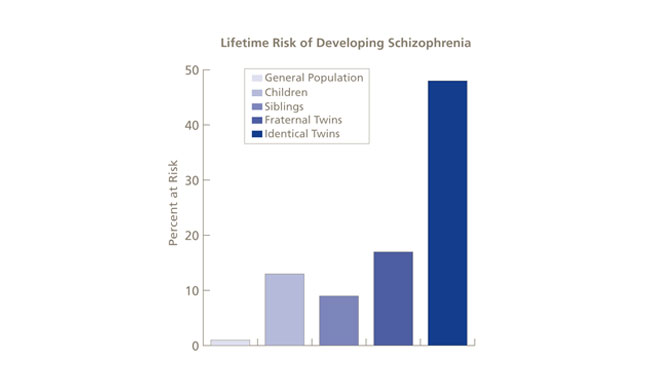 Neuroscientists know that schizophrenia has a strong genetic component, because studies show that having a relative with schizophrenia dramatically increases the risk of developing the disease. Research has identified numerous genes associated with schizophrenia that affect brain development, a finding that may lead to new ways to treat or even prevent the condition.
BrainWork, 1997. Charles A. Dana Foundation.

Neuroscientists know that schizophrenia has a strong genetic component, because studies show that having a relative with schizophrenia dramatically increases the risk of developing the disease. Research has identified numerous genes associated with schizophrenia that affect brain development, a finding that may lead to new ways to treat or even prevent the condition.

In fact, studies show that up to half of people with schizophrenia are rehospitalized while on drugs, and people with the disease tend to commit suicide at higher-than-normal rates. Fortunately, neuroscientists funded by the National Institutes of Health and other agencies are gaining new insights into the disease’s root causes, providing hope for better treatments.

One promising line of research deals with the genetics of schizophrenia, which is heritable. In recent years, brain researchers have found numerous mutations linked to schizophrenia. However, no single mutation seems to directly lead to schizophrenia, making a genetic test for the condition unlikely for now. Rather, multiple, rare mutations seem to combine to make someone susceptible. These genes seem to affect neural development and neural plasticity — the ability of the brain to reshape its connections as needed.

Brain changes that occur in schizophrenia — although too subtle to use for diagnosis — support the idea of a development disorder. Brain scientists have found small alterations in the size and composition of areas of the brain involved with memory and high-level thinking.

This evidence has convinced many neuroscientists to think of schizophrenia as a two-part disease, caused by a combination of a genetic susceptibility and an environmental trigger. Brain researchers are now looking into these triggers, which may lead to new methods to prevent or treat the disorder.

Neuroscientists have found evidence that infection, such as by the parasite Toxoplasma gondii, may contribute to schizophrenia. There also is some preliminary evidence that people who use recreational drugs, particularly marijuana, are more likely to suffer. Other potential triggers include stress experienced during childhood or while in the womb.

Research into improved drugs continues. While existing drugs typically target dopamine receptors, new studies are looking into other neurotransmitters. Early work suggests that medications that affect the NMDA receptor may improve schizophrenia’s cognitive symptoms. Other work is focused on receptors for serotonin, nicotine, and GABA.

In addition, researchers are working to identify symptoms or signs that can predict the onset of schizophrenia. One approach is the development of a schizophrenia-specific molecular biomarker, using noninvasive technology such as magnetic resonance imaging. Such a marker may aid in the development of preventative treatments to stave off schizophrenia, such as early administration of antidepressants and other medications, as well as help doctors track the effectiveness of treatments.

Schizophrenia has a wide variety of symptoms that overlap with other neuropsychiatric disorders. In fact, health professionals debate about whether schizophrenia combines many varied disorders into a single group. Continued research into the condition could lead to improved treatments for these related disorders, including bipolar disorder, social anxiety disorder, paranoid personality disorder, and more.