Stroke, a disruption in the blood supply to the brain, is a leading cause of disability around the world and the fourth leading cause of death. But what most people don’t know is that the same habits that help protect the heart — keeping active, eating healthy, and staying fit — also can help safeguard the brain. 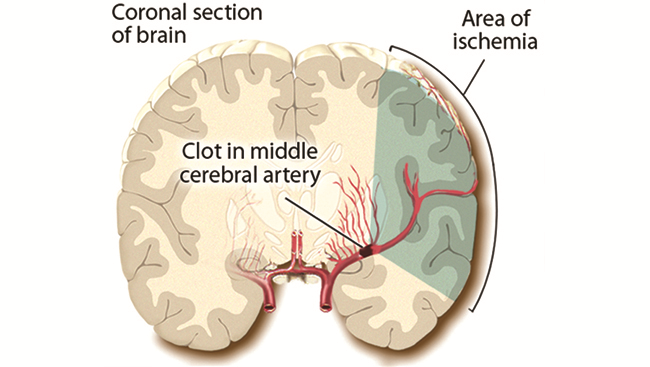 A stroke occurs when a blood vessel bringing oxygen and nutrients to the brain bursts or is clogged by a blood clot. Depending on its location, a stroke can have different symptoms such as paralysis on one side of the body or loss of speech.
Copyright © 2005, Society for Neuroscience. All Rights Reserved. Illustration by Lydia Kibiuk.

A stroke occurs when a blood vessel bringing oxygen and nutrients to the brain bursts or is clogged by a blood clot. Depending on its location, a stroke can have different symptoms such as paralysis on one side of the body or loss of speech.

Strokes are often called “brain attacks” because they involve the same basic processes that occur in heart attacks. In a heart attack, a sudden interruption in normal blood flow cuts off the supply of oxygen and nutrients to the heart, causing parts of it to die. In a stroke, it is brain cells that are cut off from their energy supply and perish.

Scientists have found that physical activity may be a central factor in staving off some devastating brain diseases, such as Alzheimer's disease and other neurological disorders. They also know other healthy lifestyle choices can help prevent stroke. Ongoing research into the diagnosis, treatment, and prevention of strokes is leading to:

In many ways, brain cells are more vulnerable to damage than heart cells. Brain cells are a hive of constant activity, sending electrical and chemical signals dozens or hundreds of times per second. This takes an enormous amount of energy. Although the brain makes up only 3 percent of body weight, it consumes roughly a fifth of the body's entire oxygen supply. So if the heart is like a chef — pumping out oxygen and sugars that fuel the entire body — then the brain is its hungriest customer and the most susceptible to interruptions in the food supply.

Also like heart disease, stroke is one of the most common conditions in the world, and one of the most destructive. Stroke disables more Americans than any other condition; as the U.S. population ages and obesity levels rise, experts fear the number of strokes will increase in coming years.

Not all strokes are the same. In the vast majority, a blood vessel supplying the brain is suddenly blocked — usually from a large clot — cutting off oxygen and nutrients to an area of the brain. In about one-sixth of strokes, blood normally walled off from direct contact with brain cells begins to leak into the brain. This upsets the delicate chemical environment of cells and can cause the brain to swell and push against the skull, leading to cell death. Often, these kinds of strokes are caused when an aneurysm, a weak or thin spot on an artery wall, breaks open.

Time is of the essence in treating stroke. Some brain cells die within minutes of a stroke, but other cells take hours to succumb and can be saved with prompt treatment. Because of this, experts urge people to seek immediate emergency help in the case of any stroke symptoms, all of which come on suddenly and without warning.

In the first few hours following a stroke, doctors have several tools to minimize brain cell death and reduce the chance of permanent symptoms. These include drugs or surgeries that can dissolve or remove clots, as well as procedures that can repair leaking blood vessels. Scientists also are experimenting with induced hypothermia — cooling people to low temperatures — to slow down the damage process.

Because any part of the brain can be affected, strokes can lead to many long-term symptoms including partial or complete paralysis, trouble walking or speaking, memory and thinking problems, difficulty controlling emotions, or pain or strange sensations. These effects can be lessened if medical attention is sought as soon as they are noticed, but even with prompt treatment, many strokes lead to permanent damage.

Because the brain has a remarkable ability to reroute circuits around injured areas — a property known as plasticity— many of these disabilities can be treated. For instance, doctors use specialized forms of physical therapy to speed up the rerouting process in the case of paralysis, and can apply magnetic and electrical stimulation to the brain to increase the brain's plasticity for other symptoms.

The most effective method to combat stroke is to prevent it. Some factors that increase the risk of stroke can't be controlled. Although everyone, including babies, can suffer from one, the probability jumps significantly with age. Genetics, gender, and place of residence also can increase risks.

Many risk factors can be reduced, at least partially. High blood pressure is the most significant factor, and heart disease, diabetes, and high cholesterol also heighten stroke risk, but can often be controlled with medication. Lack of exercise, smoking, alcohol abuse, and illegal drug use make an individual more susceptible, as well. In some cases, vulnerable patients are given drugs that reduce the clotting ability of blood, such as aspirin, in addition to advice to change their lifestyles.

Strokes are one of the major reasons that quality of life can diminish as people get older. But they are not always inevitable. The same steps that contribute to keeping physically vigorous — regular exercise, a healthy weight, and a balanced diet — can maximize the chances of staying sharp and alert for decades to come.