The cerebrum, the largest part of the human brain, is associated with higher order functioning, including the control of voluntary behavior. Thinking, perceiving, planning, and understanding language all lie within the cerebrum’s control. 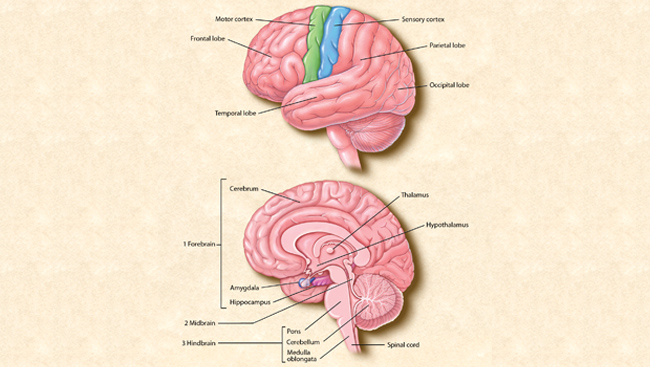 The top image shows the four main sections of the cerebral cortex: the frontal lobe, the parietal lobe, the occipital lobe, and the temporal lobe. Functions such as movement are controlled by the motor cortex, and the sensory cortex receives information on vision, hearing, speech, and other senses. The bottom image shows the location of the brain's major internal structures.

The function of the cerebral cortex can be understood by dividing it somewhat arbitrarily into zones, much like the geographical arrangement of continents.

The frontal lobe is responsible for initiating and coordinating motor movements; higher cognitive skills, such as problem solving, thinking, planning, and organizing; and for many aspects of personality and emotional makeup.

The parietal lobe is involved with sensory processes, attention, and language. Damage to the right side of the parietal lobe can result in difficulty navigating spaces, even familiar ones. If the left side is injured, the ability to understand spoken and/or written language may be impaired.

The occipital lobe helps process visual information, including recognition of shapes and colors.

All of these structures make up the forebrain. Other key parts of the forebrain include the basal ganglia, which are cerebral nuclei deep in the cerebral cortex; the thalamus; and the hypothalamus. The cerebral nuclei help coordinate muscle movements and reward useful behaviors; the thalamus passes most sensory information on to the cerebral cortex after helping to prioritize it; and the hypothalamus is the control center for appetites, defensive and reproductive behaviors, and sleep-wakefulness.

The midbrain consists of two pairs of small hills called colliculi. These collections of neurons play a critical role in visual and auditory reflexes and in relaying this type of information to the thalamus. The midbrain also has clusters of neurons that regulate activity in widespread parts of the central nervous system and are thought to be important for reward mechanisms and mood.

The hindbrain includes the pons and the medulla oblongata, which control respiration, heart rhythms, and blood glucose levels.

The spinal cord is the extension of the brain through the vertebral column. It receives sensory information from all parts of the body below the head. It uses this information for reflex responses to pain, for example, and it also relays the sensory information to the brain and its cerebral cortex. In addition, the spinal cord generates nerve impulses in nerves that control the muscles and the viscera, both through reflex activities and through voluntary commands from the cerebrum.