For centuries it was the brain's grey matter that fascinated neuroscientists. But when a new technique emerged in the 1990s that gave researchers the chance to examine the white matter in detail, things began to change. Meredith Thomas went to meet Professor Derek Jones, who believes that it's the white stuff that really matters. 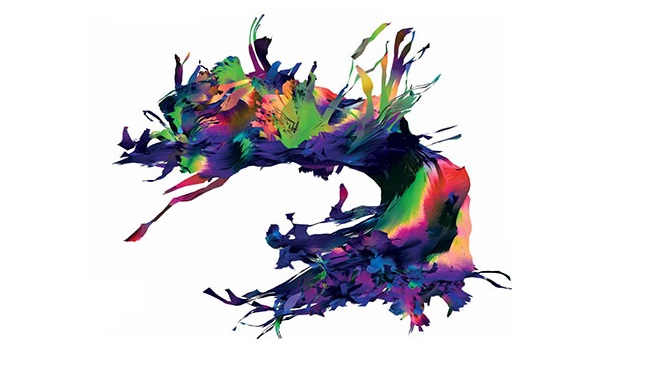 A tractography reconstruction of the arcuate fasciculus in the left hemisphere of a 40-year-old man. The arcuate is a crucial pathway in the language system, linking Broca's and Wernicke's areas.
Derek Jones and Silvia De Santis

There were delays on the District Line. Hopes of catching my train from Paddington were fading fast. A glance at the Tube map showed that I was stuck, so I dashed to street level and flagged down a taxi. After weaving through west London traffic, we hit the A40 and from there it was a straight run to the station. I arrived just in time to catch my train. Soon I was hunkered down in a window seat, hurtling into the oncoming rainstorm. My destination was the Cardiff University Brain Research Imaging Centre (CUBRIC).

Connections matter, especially when they break. And connections matter more than most to Wellcome Trust New Investigator Professor Derek Jones, the man I was travelling to meet. He is preoccupied not with transport infrastructure, but with the infrastructure of our brains, and he believes that we need to fundamentally rethink how we go about studying it.

CUBRIC is packed full of all sorts of brain imaging technologies, including a magnetic resonance imaging (MRI) scanner and a magnetoencephalography (MEG) suite. These are old tools in the effort to understand the mysteries of the brain, but they are being used in new ways to once again push the frontiers of neuroscience. In his office, away from the relentless hum of machines, Jones settles in to tell me what he thinks neuroscientists are getting so badly wrong.

"My prime interest is to be able to understand individual differences in brain function," he says. "We know the brain functions as a network. Therefore it is entirely dependent on the connections between different areas.

"If people have different levels of optimisation in those connections, we can start to explain differences in performance." He wants to understand the strength of a connection in terms of its function. In other words, how much information can it carry, and how quickly?

A better knowledge of the brain's internal wiring also has a clear clinical imperative beyond mere academic interest. Altered connectivity has been implicated in a range of psychiatric conditions, from alcoholism to Tourette syndrome. According to Jones, the reasons for this are clear. "If you start to damage the wires in there, you can instantly tell there is going to be a problem with the functioning of the network."

Historically, the problem has been that these connections were impossible to observe non-invasively, even with conventional MRI. For this reason, white matter was essentially ignored for most of the 20th century.

But an MRI technique called diffusion tensor imaging (DTI) arrived in the mid-1990s, finally offering researchers the opportunity to observe the structure of white matter non-invasively. Peter Basser published the first paper on this technique [1] in 1994, at the same time that Jones was starting his PhD. Basser's breakthrough was to realise that the spaghetti-like structure of axons could be investigated by exploiting the effect its geometry had on the movement of water. "We tune the MRI scanner so that the signal strength depends on the movement of water molecules in the brain," Jones says.

"Normally, the movement of water molecules is random. In a pot of water they would be completely unhindered and the water molecules have an equal probability of going in any direction. In tissues, though, the cell membrane and macromolecules get in the way." Along the length of axons, water molecules are hardly restricted at all, and MRI can be set up to detect this. "So, you can work out the direction that the spaghetti is mostly pointing in."

Measuring the tendency of water to diffuse in one particular direction more than any other gives an estimate of the orientation and degree of alignment of neurons in an area of the brain. This measure, termed anisotropy, was seen to increase in the brains of children as they grew, leading researchers to make an association between high anisotropy and good connectivity.

By putting data for the whole brain together, it became possible to map the probable paths of connections between different regions of grey matter. This led to lots of colourful maps of the brain, showing the white matter's structure in more detail than ever before. Anisotropy is simple to measure, which - combined with the ease of obtaining data for an entire brain - made DTI extremely popular for the next 15 years.

However, according to Jones, cracks are beginning to show. Contradictions have started to appear in real scenarios.

In many cases, cognitive neuroscience has established the brain areas that are involved in particular tasks. It became possible to measure people's aptitude at a task and then study the connectivity between the relevant brain regions, testing theories about anisotropy.

According to Jones, the root of this conflict is in the "lazy" correlation of anisotropy with the strength of a connection. "It is slightly contentious with some of my colleagues," he says, "but I believe that seeing a difference between anisotropies is effectively useless."

One problem he describes with DTI is the method used to reconstruct tracts. Bundles of fibres in the brain frequently cross through each other. Many algorithms in common use fail to distinguish between two paths crossing and an area of low anisotropy. This is because, despite large number of neurons being present, there is no longer one clear direction.

"The algorithms used to track paths assume a single orientation. If you're trying to fit a model that assumes there is only one dominant fibre orientation, where there are in fact multiple fibre pathways going in different directions, you are clearly going to be wrong," Jones says. "Fibre tracking based on this technique is being used by neurosurgeons to plan where it is safe to dissect a tumour. If you can make such a gross error, it's quite worrying."

There is another problem too. "It's not enough just to reconstruct the paths," Jones explains. "What is more important is to talk about their attributes and their capacity to carry information."

"People have assumed that higher anisotropy means better nerve conductivity, which means a better performance. However, if we take the example of how fast information is carried along an axon, the two major determinants are the thickness of the fatty myelin coat that wraps around the axon, and the diameter of the axon itself," says Jones. He explains that, as either of these factors increases, so does the speed of conduction down the nerve. However, anisotropy does not relate in such a straightforward way: an increase in the thickness of myelin means an increase in anisotropy, but an increase in axon diameter means a decrease in anisotropy.

Many researchers have brushed off these fears, using DTI to investigate numerous diseases. "Name me any neurological or a psychiatric condition and I guarantee that someone has used diffusion tensor imaging on it and found a result," he says. "Yet the situation is not as simple as some people think, and I feel that this could have a negative impact on some of the conclusions that have been made."

For Jones, meaningful results will come from a holistic consideration of both the geometry and the microstructure of a fibre. He hopes to finesse DTI and shore up its reputation with an approach he calls tractometry. "If you can do a good job of reconstructing the fibre trajectory, that's the 'tract' bit. Then quantifying the relevant aspects is the 'metric' bit."

He has a dual strategy for studying the microstructure. The first goal is to establish the distribution of axon diameters and the degree of myelination in each part of the brain. These data can then be combined with information about the tracts, which researchers will get by using algorithms that can identify where paths cross each other. The techniques to do this already exist but require development if they are to be used efficiently.

His optimism about the benefits of his new approach is palpable. "I really do feel we are entering a new era. By putting these techniques together there is a chance to get new insights," he says. "Once that is done and we know about the individual healthy brain, then it has to pay dividends in diseased brains. I am a just a humble physicist but I think it will definitely help us to understand symptomatology of psychiatric disorders better."

Jones was not always destined to become one of Britain's imaging specialists. Disenchanted with study, he had intended to leave school at 16. Fortunately, he changed his mind. "It sounds poetic," he says, "but I was lying in a field looking at the clouds. I thought it would be really interesting to predict the weather." After being informed that meteorologists were generally graduates, he went back to school. He went on to study physics at the University of Nottingham, gaining a first-class degree.

"I really didn't enjoy it," he says. "I could do it but I wasn't very fulfilled. Then, in my final year at university, we did medical physics. It totally rang all the bells for me. I like solving puzzles and I can't think of a more interesting puzzle than how the brain is connected together. It is like a jigsaw that has evolved."

Thankfully, the pieces of the puzzle are now beginning to fit together, and Jones is going on the offensive, publishing combative papers in medical imaging journals to push the message home [2,3].

My journey back to London was flawless. Connections matter. They matter inside our heads just as they do in the world around us. And, in neuroscience and travel alike, to get to where you're going, you need more than just a map.